I popped over to Bruce's this afternoon (vacations are great!) to play some HoTT. I have never played with much magic before so was keen to try things out. Bruce provided some 15mm armies. I took the undead and played first against dwarves and then against a daVinci army that includes a cool flyer. 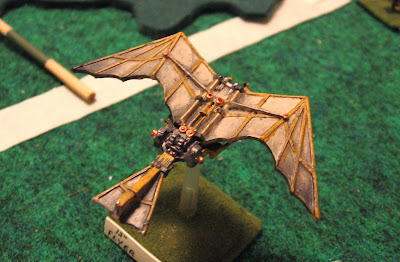 Here is a shot of the dwarves coming down off the hills to kick my butt.

About my only good move of the afternoon was working my flyers around behind (made from paper, putty and some Airfix seals!) his line and giving one unit the buttocks of death. Then he pounded me with the blades of doom. 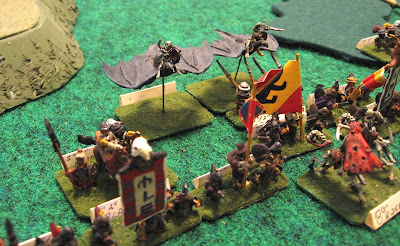 I fared little better against the daVinci army. I thought I had him but could just not roll enough to finish the thing and then slowly got ground down. How many 1's are there in these dice?!?!

Overall, a good time. Magic is nicely understated. I'm not sure entirely how to play the skeletal hordes--Bruce suggests rushing them out to die early next time and then reforming them. I think that sounds pretty good--maybe take down a few enemy units.

Up next: 28mm dwarf shooters and cannon plus some 15mm AWI. Looks like the club is a bust tomorrow so I'll paint instead.
at 2:59 PM