I finished the basing on some 28mm Roman centaurs last night. I made these two bases from the remains of some Wargame Factory Roman cavalry to HoTT-up my Marian Roman DBA army.

These fellows will be riders. The conversion (which would be a generous term here) was fairly simple. I took the extra riders and lopped off their legs. Then I carved the torso down until it fit into the body of the horse. 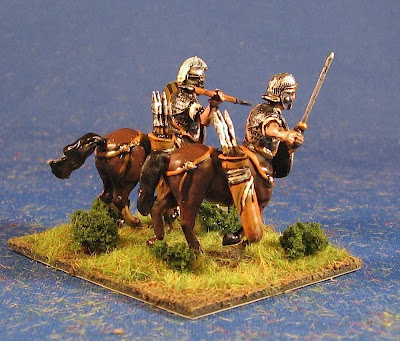 Neldoreth did something similar (but much better!). Had I used some extra legionnaires I would have had more options for a dynamic pose with the shield. That is something to remember for the Celtic army. 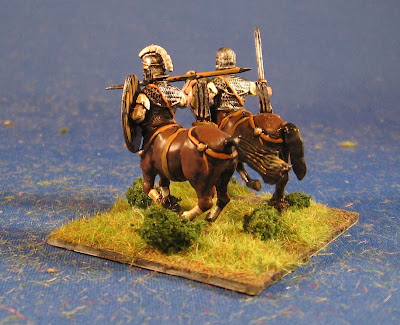 Once I had a decent fit, I glued the bodies on and used a bit of extra cement to smooth the join. I think this worked out okay. The poses got more dynamic as I went along and learned from each figure--the fellow with the spear (but not the commander's helm) is probably the best in person with a nice twist to the torso. 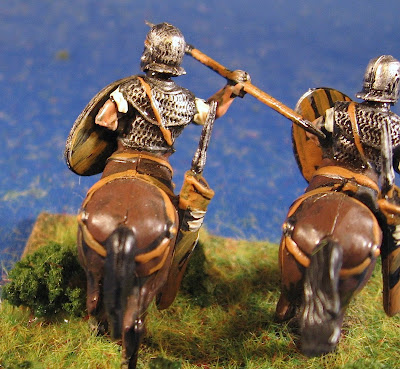 Then the usual painting, basing and whatnot. Some extra effort on the shields (maybe a yellow line joining the dots) would have been good. Perhaps I will come back to that. 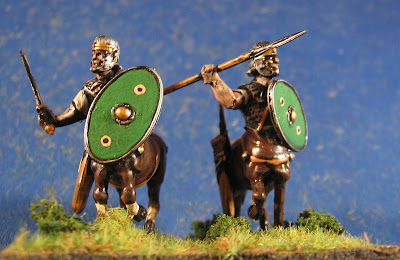 Up next: I have 8 15mm AWI guys ready to dip and base along with some 28mm warg riders and a troll. Thereafter, another 12 15mm AWI guys are queued up. Then back to some fantasy for awhile, although house guests are going to cut into my painting time this week. Bruce is also dropping by for some CCA action this afternoon!
at 7:58 AM

Must. Not. Make. Centaurian. Joke.

Nice work on the figs.

Thanks for your restraint.

The fellow in the commander's helmet will forever after be known as Centaurian Horst (a Germanic mercenary, perhaps?).

Excellent work here. I tried HOTT a couple of times and enjoyed it. However, I think that more folks in my gaming group are interested in the Fantasy version of Impetus. Time will tell.

Thanks. I did a LotR adaptation of Basic Impetus that one day will be published in Battlegames.

If you shoot me an email (bob.barnetson@shaw.ca) I can email you the files for a look-see.

In the sphere of fantasy gaming it is rare to see something truly original - Roman Centaurs - inspiring, very well done.

Okay. Now I can afford to create a centaur army.

Okay. Now I can afford to create a centaur army.

Wow I just stumbled upon this and can't believe I haven't tried doing this yet. I have some spare gripping beast viking berserkers around and I reckon they are an excellent candidate to get some centaur treatment.

Cheers for the inspiration!

Glad to have helped!