One of my 2011 gaming goals is to field some 1/72-scale AWI armies. I picked up a bunch of Imex figures in a trade with Justin. Today I finished off a box of Imex British Red Coats. These are quite nice figures and the plastic is very hard.

I painted 38 figures, eight bases of four-man shot and three bases of two-man skirmishers. Looking at them in the cold light of dawn, I see that I should have reversed the colours on the drummer's coat. And I have also given men in knee-high black boots knee-high white putties instead. Oh well! I wasn't looking to replicate any particular units but rather create some generic troops. 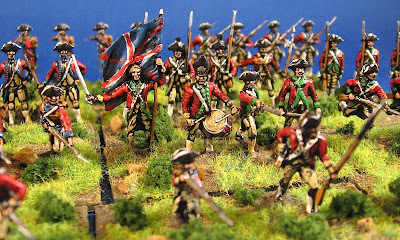 I've already some Indian allies for these fellows. And I should have some artillery ready to go for tomorrow. That just leaves some Loyalist stands (that I have yet to source) and a few bases of mounted troops (which are underway).

Up next: A slew of 1/72-scale AWI are in various stages of drying and basing. I expect British artillery are next followed by American foot, dragoons and some artillery. Then likely some British dragoons and cavalry. I also have a 15mm Early Imperial Roman army that is almost painted.
at 9:38 AM

You didn't properly research the uniform of a particular regiment? Scandalous!

I wish somebody would release 1/72 Seven Year's War models. We've got the Indians already, we just need a set of troops like these with big jacket cuffs and short collars.