The joy of the job lot at the club's auctions are getting weird things. Like these dwarves. There are at least three manufacturers in here and the common theme is some sort of vaguely WW1 German version of dwarves. I think I will put this unit back in the club auction this spring (unless someone wants to buy it earlier) and see what they fetch. 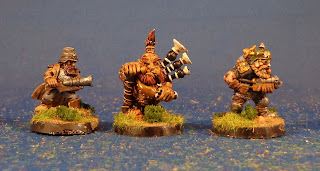 Some of these were painted before I got them (the bagpiper, the officer) and a couple I finished up. The backs of the figures have some nice detail as well. I quite like the flamethrower guy. 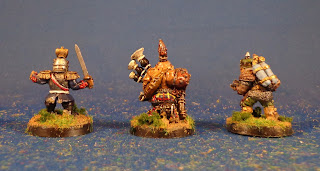 Up next: Some HoTT at EDBAG tonight. Then I just finished some 25mm stockyards for a superheroes game. Now onto some more 15mm cavalry.
at 11:44 AM

Will provides some background on these fellows:

I don't remember putting those miniatures into the auction, but I remember painting them, or at least starting to paint them! Most of the dwarves are from Rafm's dungeon crawl game, Death in the Dark. I liked the fantasy WWI theme, and used them as a Mordheim dwarf warband. The hobbit is from GW - that's supposed to be a Hawaiian shirt he's wearing, and the bagpiping dwarf is from, em, I forget, that French company (not helpful, I know!). His staff was orignially an axe, but the head snapped off 8^( The officer's sash is based on the WWI German flag. Oh, and the dwarf with no name is a really old, 1980s Citadel joke figure.

Thanks, yeah I agree. That was my thought when I was painting them--took me back to the old D&D figures by Grenadier (or Citadel?) from when I was a kid.

The Dwarf with the bagpipe is one of the Confrontation Line. Very beautiful miniatures from back in Rackhams heyday.

The guys with the Kaiser helms and blunderbusses, the fellow with the sword in the first picture, and the lad with the flamethrower are all RAFM miniatures made for their Mordheim-style skirmish game "Death in the Dark". The little guy second from the left in the second picture isn't a dwarf at all, but rather the halfling scout from GW's Mordheim range.