I finished a pair of stockyard bases plus some extras for 28mm superhero gaming. These are an older Walther HO scale train kit but the scale is close enough to work with 28mm (lizard guy with ray gun for scale). 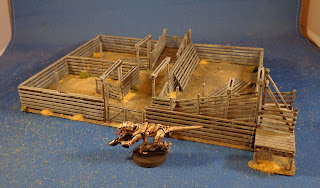 While an abandoned stockyard is uncommon in today's downtowns, I recall these from when I was a kid in Calgary down by the brewery. They also provide gameable urban terrain--lots of LOS blocks and movement impediments but the terrain itself is "open" and figures can be placed in it. 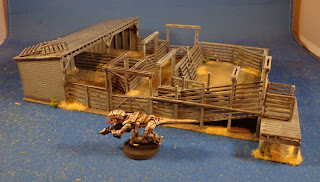 I image these need a rail-line and a couple of cars to go with them and that is an Xmas project. There were also a couple of sheds. My next super hero task is a gaming surface--some roadways and whatnot. I have some downloaded paper roadways that I'm going to look at. 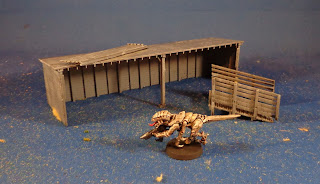 Up next: I'm painting on some 15mm polish cavalry. Man, is plain chainmail ever a lot easier to paint than fancy pantaloons!
at 7:08 AM