EDBAG battle for the mountains

Last night was the fourth night of the EDBAG HoTT campaign and there were six guys out. The goal of the campaign is to get four mountain spaces on the Board and Dave was close at the beginning of the night (holding three). That made him the target. 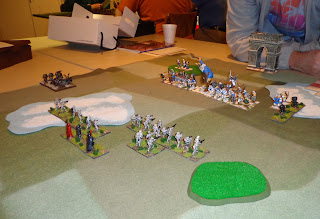 First game saw the dwarves come to the aid of the misunderstood imperials who (quite innocently) wandered into the realm of the ice queen. This game was going badly for the ice queen (think "swearing and thrown dice" bad) until she managed to ensorcel both Darth Vader and the Emperor and thus pushed back the invasion. 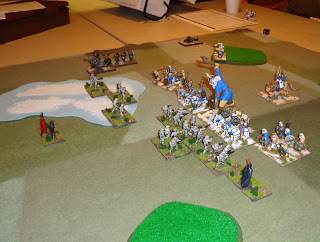 Over on the other table, Dennis and Scott squared off with Bruce supporting Scott. Dennis managed to bag Scott's stronghold with a sneaker and win his second mountain. These two forces would face off again in the second game with a general kill win for Dennis, thereby taking one of Scott's home territories. Dennis was unstoppable! 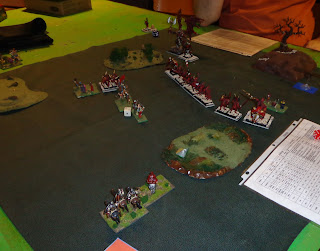 The imperials dusted themselves off for a second go at the ice queen, this time with the help of Bruce's imperial Romans (us emperors got to stick together). This went better for Dave despite some gamey terrain play using lurking probe droids. Dave's dice came around in this game, though! 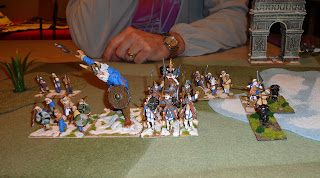 As Dave advanced into heavy blaster fire, the Emperor and Darth Vader made an end-run to bag the ice queen's stronghold. We had then a long period of back and forth as the stronghold held out against sabre thrusts (for five or six turns--how many sixes are on that die!) and the stormtroopers (rather luckily) pushed back the icemen. Eventually Dave's luck ran out and the stronghold fell just before the stormtroopers crushed his army. The imperials scored their first mountain square. 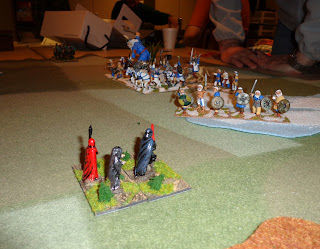