We had 12 guys out for the last club night of the year and three games ran. Kevin and Elliot played some Hordes while Dave hosted four guys in a game of Commands and Colors Napoleonics, using some very pretty 1/72 figures. I believe they got two games in last night. 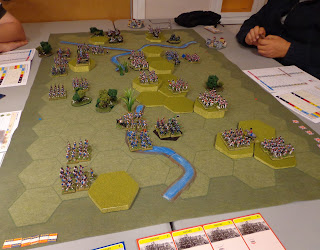 Scott brought out a three-sided, four-player game of War Rocket. I played the Privateers and my goal was to get the colourful civilian ships off the far side of the board. 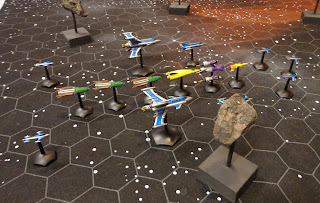 Opposing me were Bruce's Imperials, whose job was to prevent the convoy from getting off the table. As you can see below, Bruce was pretty effective at disrupting my formation (you jerk!). 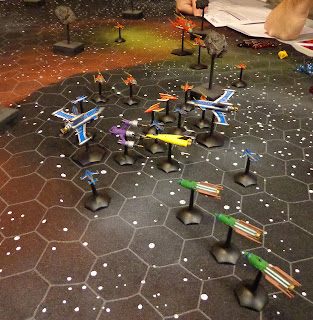 Annoying both of us were the saucer people (Terry and Chen) whose goal was simply to destroy both the red and blue fleets. In game one, they basically did that as Bruce and I beat the heck out of each other early on and were too weak to stop the saucers, despite making common cause. 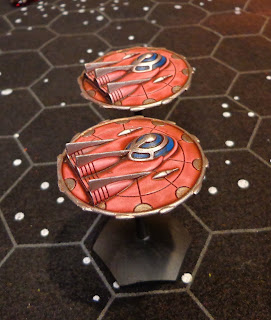 We played a second game where Bruce and I still battled (a bit) but spent most of our time cooperating to bag the Saucer folks. We managed to beat the saucers down but, in the end, we had a tactical draw. I had more ships but no convoy left and there was little point is duking it out to the last man. 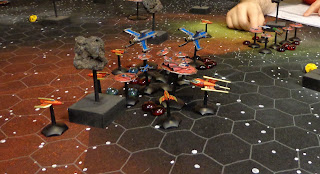 Overall, a very enjoyable fleet level game. I wonder if there has been a Star Trek adaptation?

What figs were you using for the War Rocket game?

I believe these are the official figures supplied by the game's manufacturer. The civilian ships were 3-D print renderings from an online site (the name of which eludes me at the moment). I expect Scott will be along shortly with the correct answer!

As it turns out, this is covered on Scott's blog: http://scottsgamingstuff.blogspot.ca/2012/12/war-rocket-extras.html

I am sure we will see this run again once Scott gets his Pirate Fleet..Arrrrrr! The we can have a 4 player smackdown!

With the exception of the civilian ships, the rest are from Hydra Miniatures. Civilian ships came from Shapeways.