The weather appears ready to warm Sunday which will allow me to prime a bunch of things I have ready. In the meantime, I knocked off a few NPCs for Gotham. Super System uses groups of NPCs that act as a single character and the figures usually operate in multiples of five.

First up were some ninja. I ran short a figure so threw in Lobster Johnson (no really, that is his name) with a handgun. Good pulp sculpt from Heroclix.

I also did up a band of hench(wo)men for The Joker using martial arts themed Heroclix. A bit like angry Kiss groupies, but whatever. You can get a pretty nice look from these with a bit of highlight painting and some washing. 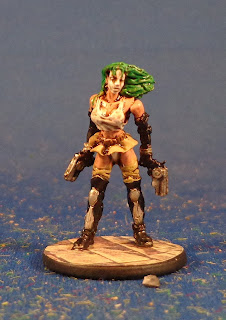 Then there were a cluster of extras. The ladies on the left and right could supplement the Joker's cohort. The lady with the whip could be a generic adventurer. The fellow in white looked like a gangster.

Running this figure down online, he is The Scourge--a Marvel character that assassinates dated supervillians in that universe (handy tool for editors, I suppose). This sculpt has him wielding an MP40 with some sort of extra grip welded to the left side of the barrel. The online description says he's normally armed with "a .50 cal Thompson machine gun with a sawed-off barrel and stock using special purpose 5-round clips." Well, I guess it is the comics! 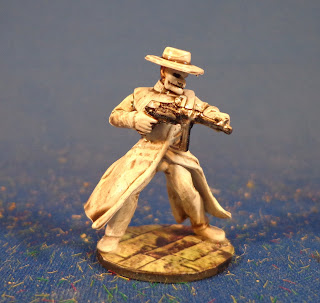 Up next: A buttload of priming, including some 15mm cavalry and some buildings. I also have some 28mm dwarves (the Kaiser's Bavarian Dwarf Commandos, by the looks of them) just about based. And EDBAG meets Tuesday night for HoTT.
at 6:52 PM