I have some 15mm cavalry that are drying on their bases. In the meantime, I finished up some 28mm walls for the tonier regions of Gotham (perhaps a graveyard). 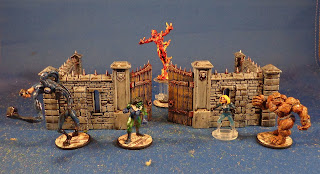 These are GW walls from their manor kit and there are four pieces--a pair of gates and two longer wall sections--maybe 20 inches of wall all told. 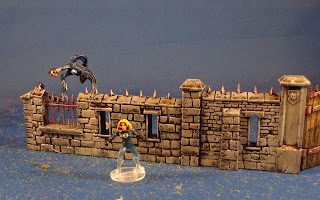 Up next: Some 15mm cavalry. And I have built and primed a bunch of 28mm dwarves that I will paint this week. Then back to another box of 15mm cavalry--three more to go! There is also club night on Tuesday.
at 2:06 PM

Bob, this is going to be some superhero game once you get it all on the table!

Yes, almost there. Need some time over Xmas to get the rules squared away.