Bruce put on a game of Maurice last night, using the updated card deck in the light rules. I believe the battle was Fontenoy (?) which was one of the Wars of Succession (Austrian?). I was the British/Saxons and was attacking a much larger force in a good position. 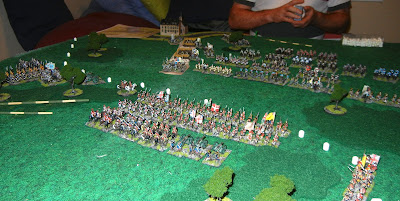 In retrospect, I should have split my forces and attacked in strength along the river. But I didn't and instead tried to go straight through a bottleneck. Bruce played a card that drew out the centre of my line and then they got greased in a charge. 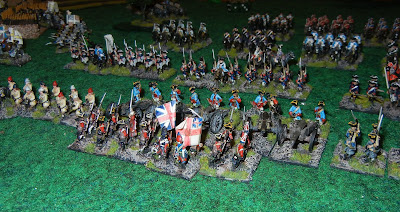 This allowed a cavalry charge which took out five units of cannon. After some mulling, I decided to retreat my cavalry back. Not exactly the bravest choice but I preserved the units. 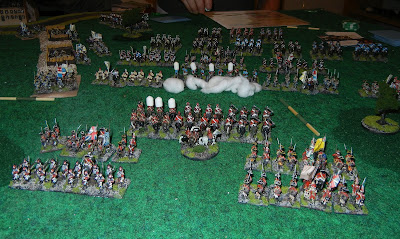 Bruce noted this was the first time he'd ever seen the lines open (or be opened...), cavalry come forward, make a decisive strike and then retreat. I think that speaks well of the rules that it allows historical tactics. 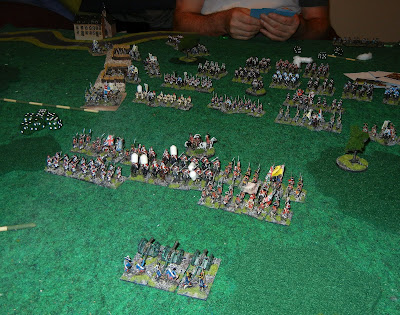 There was some more grinding and then we eventually ran out of cards before I could lose decisively. But clearly I did! Overall, a very fun game. I also think this is about as large a game as two players could manage. Bruce plans to run a four-player, two-deck game at the club next week to show off his incredible rebasing-what a trooper he was! 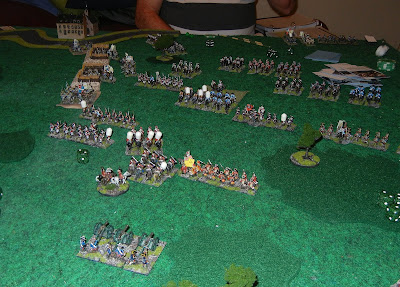 Up next: I have some 1/72 AWI underway but likely they will take until the weekend to complete. I also built 40 28mm renaissance foot which are my next project.
at 5:58 AM

Good battle report. Impressive array of miniatures. It sounds like a fun game.