We had 14 guys out at the club last night and three games ran. In an unusual situation, we actually had more guys than games! 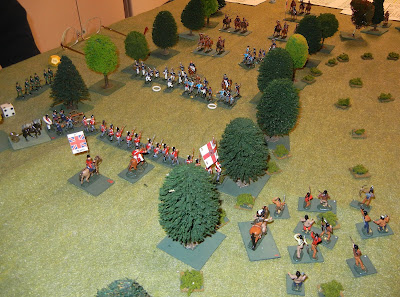 Carl hosted Chris, Chen and Guy in a War of 1812 game. My understanding is that the British won. I'm not sure what rules Carl used, although I did see some Piquet cards in the box as he was setting up, so perhaps a variant? Nice to see his 1/72 Naps get a work out. 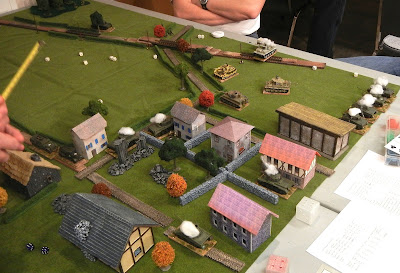 Dave hosted Alan, Scott, Terry and Kevin in a game of Kampfgruppe Normandy. This recreated Wittman's shooting up of a British column using Dave's 1/72 troops. There was time to play the game twice as Scott had his usual trouble with the dice while playing the Germans (how can you lose three Tigers to a bunch of Cromwells?!?). The second game looked a lot more historical in terms of what was burning! 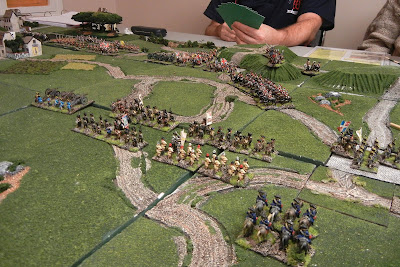 Bruce hosted Mike, Andy and myself in a game of Maurice using 15mm SYW troops. This was an encounter game on a 60x36BW board. Things started out well as Andy charged his cavalry at my militia and it was shot to pieces with some lucky card play and Mike's hot dice. At this point, I turned to Mike, said "We're up three--this is the point where I usually get cocky and lose the game." 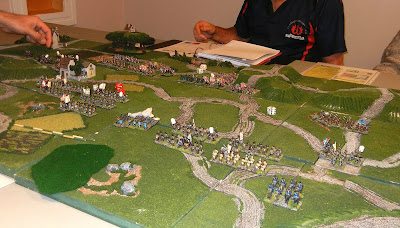 And then we managed to do just that. We swung our own cavalry out on the left (not the fickle hand of fate in the photo) and got the stuck and eventually picked to pieces. In the meantime, Bruce and Andy came across the middle and managed to bag our cannon and a couple of extra units, pushing us past our break point. Arrrgh! Andy had some pretty amazing rallying dice and rolled four sixes at one point (about 1 in 1300 chance...). 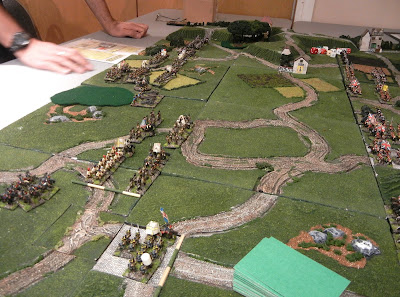 Up next: I have some Star Wars fellows on the paint table. Then perhaps onto some Carthaginians.
at 7:48 AM

Great pictures. Looks like a good time was had by all..

Thanks. Yes, I think everyone had a good time. We've certainly seen an upswing in attendance since we switched venues. We'll have to encourage more guys to bring out games!