Bruce hosted another game of Maurice last night. This time we played an AWI game that was roughly Brandywine (1777). You can see the game board from the American view below. To allow a vaguely historical development, the Americans were constrained from deploying on the right (north) side of the board and the British got two free moves to simulate the night march. 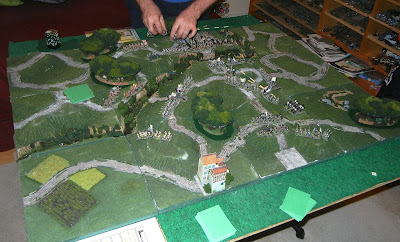 Bruce largely developed his attack historically, charging his cavalry forward. They would eventually bag a gun but then died themselves. I spent much of my first turns trying to deploy to address his attack. 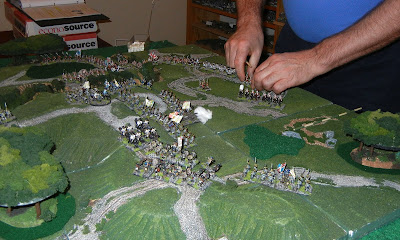 We then had a slugging match on the north side with casualties about even but the British slowly pushing the Americans back. There were a few exciting moments (churned up ground became swampy, a unit went out of control) but Bruce suddenly bagged two of my units and then I was in the soup. 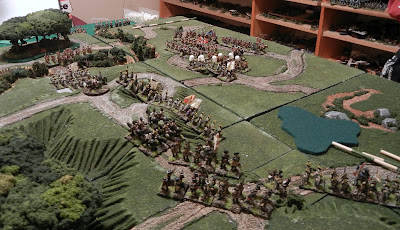 I again redeployed, this time pushing the militia into the line (on the right) while holding a hill on the left and maneuvering my cavalry. 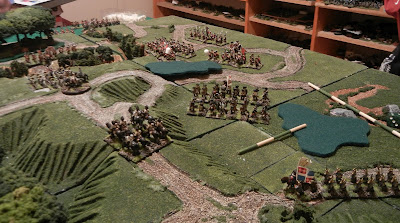 A fair bit of shooting ensued and I charged, first with my last unit of line (on the hill on the left) and then with my cavalry. His grenadiers withstood both attacks and eventually my hardy militia gave the ghost and we were forced to retreat.

Overall, a nearly flawless game that largely recreated the historical outcome without it being predetermined. There were a couple of points where I could have won but eventually Bruce's weight and patience were telling. Up next: I have some 28mm skeletons primered and underway. I also have some 25mm Star Wars figures underway. And the club is next Tuesday.
at 7:19 AM