With a sigh of relief, I give you the last of the Star Wars fellows from my painting pile! These are 25mm West End Games figures from the 1980s that I (mostly) got in crazy eBay auction a year or two back.

First up are some command bases, including some imperial droids. I quite like the admiral figure on the right. 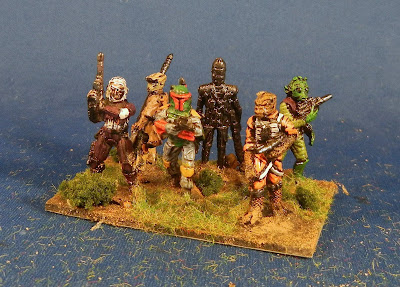 And now some bountyhunters. Boba Fett was a gift from a fellow on TMP (who also supplied me with yesterday's R2D2) and he even came painted! The rest are my approximations (from memory) of what these fellows looked like. In HoTT these guys might be warband. 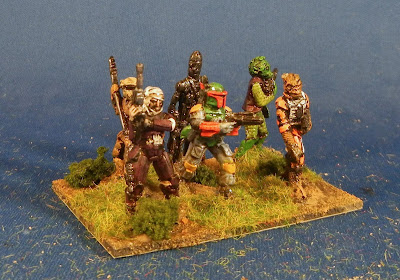 Up next: I have 30 or so 25mm Celts, 3 elephants and a couple of light horse spray primed as the start of my Carthaginian army. I also assembled another 30 or so foot to represent the heavier foot as well as give the Romans some additional light troops. Still need to run down some cavalry but these will keep me busy painting for awhile!
at 7:05 AM

Sad that this is the last of the WEGs, I've been enjoying the roll out. Look forward to another play report before too long.

Thanks Don Yes, I'm hopeful we'll play again too. I've got my eye on some more vehicles.

I really hope that Disney in Orlando hasn't realised that these are worth a mint and is still selling them at 99c a blister....