Although my blogging has been quiet, my paint brush has been busy. The first things to roll off the production line this weekend are these three AT-AT walkers to add some punch to my daughter's Star Wars army. 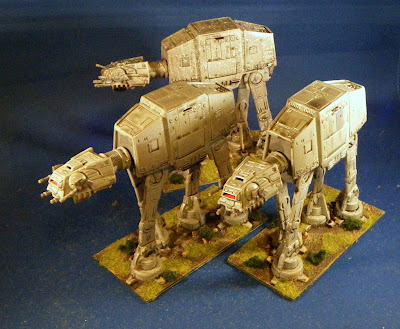 I got these from a fellow in the States for a very nice price. I also have a bunch of rebel snow speeders to go with them. Those will require more work as well as some thought about basing them properly as flyers. 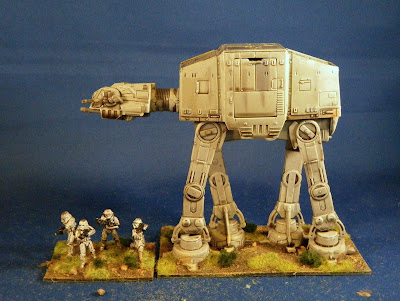 I think these are likely behemoths in HoTT. They are about half the size they need to be to be 28mm but they will work well enough. Practically, they could not be much bigger without compromising the basing frontages. 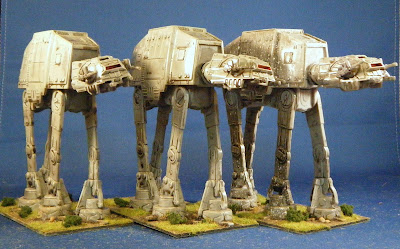 There were two paint schemes (regular and blizzard) and I simply gave them a bit of a wash and then based them. 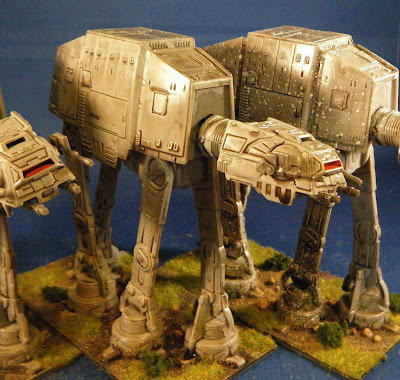 Up next: A 15mm early Hebrew army is in the final phases of basing. I also have four units of 28mm Normans being based. Then there are some 15mm Greeks awaiting attention and some 28mm hobbits primered to fill out the ranks of my Santa Claws army. There is also the club this week.
at 12:29 PM

You are the king of awesome.

Thanks! I'm thinking of am ambush game (once I get a few more units painted) where the imperials get caught in column by a weak but well positioned rebel force. Should be good stuff!

Damn. Those are sharp.

Lovely looking models. Nice to see them without a snow base for a change.

Ubique: Yes, I like Hoth but how many times can you attack the shield generator? Much better to have summer base and play any scenario you want.

Wow. I'm not into sci-fi gaming these days but they do look the business.

Jason: Thanks. My daughter is into Star Wars so I figured what the heck and bought a lot of figures. Then one needs support then you end up owning three At-Ats as a squadron of speeders... . You'll see how this goes soon enough!

Do you know who manufacture these AT-ATs? Are these Action Fleet ones?

These are the micro machine Action Fleet ones Fjodin.

Thanks Alien Wars. They are sweet models!