Hail Caesar at the Club

We had seven guys out at the club last night with two games running. Scott and Kevin played a test game of Hail Caesar, using Normans and Saxons respectively. Roughly 10-12 units per side using centimetres so we were playing on the equivalent of a 10x16 foot table.

Below you can see the two lines coming together, with the Saxons (on the left) about to contact the weaker Norman wing while the Norman cavalry had some trouble getting going and getting over a small stream (linear obstacle). 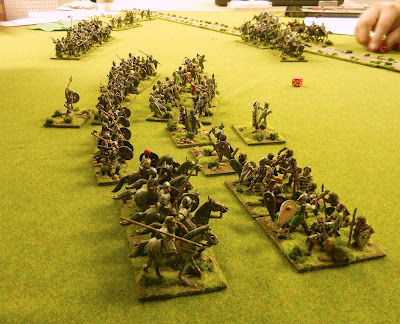 Tough dice and a bit of a mismatch meant the Norman wing in the foreground was crushed, except for a tough band of infantry that drove the Saxon troops back halfway across the board before throwing in the towel. 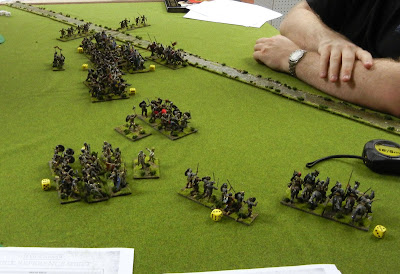 The Norman cavalry eventually got into the game and smacked the Saxon shield wall pretty good but the weight of the shieldwall (after the initial clash) was enough to turn the tide.

The guys switched sides and the Normans (on the right) had a bit of a command roll malfunction which put their cavalry far out in front. Kevin decided to keep charging and ran straight into the Saxons. He was quickly flanked and crushed. 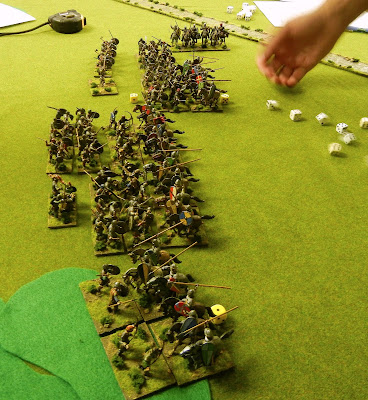 The terrain rules were simple enough that they worked pretty well and did not impinge upon play. I think the sides might have been a bit unbalanced. We'll need to play on a bigger board next time and uses inches! But that will mean painting up a few more figures.

Bruce put on a game of FUBAR using some 15mm sci-fi figures. This tank eventually managed to activate but took too long to get into play. Cobra Commander will not be pleased! 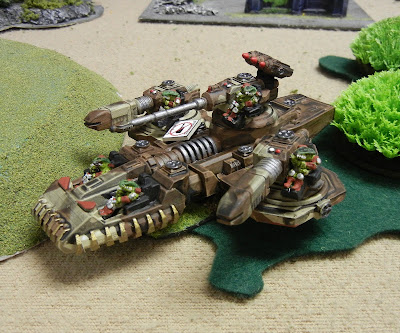 Up next: A few more superheroes are underway. And likely some War of 1812 1/72 figures will get my attention this weekend.
at 6:50 AM

Fun game of Hail Caesar, Bob. Thanks for putting it on.

Thanks Kevin. I'm keen to try some Romans v Carthaginians or Celts--will need to con Bruce into providing the figures!