After some distractions, I'm now back to a serious and proper gaming subject, some 28mm Normans. These are a mixed lot from Scott, including some Foundry and some Old Glory. 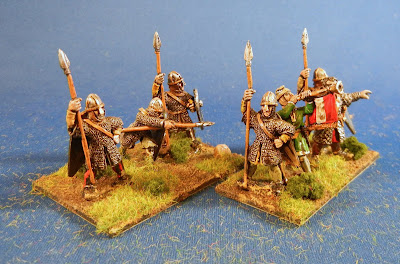 First up is a base of 3Sp on the left and 4 Bd (General). The General needs a banner (red with white cross, I think) but I'm putting on a game tonight and simply needed the extra bases to flesh out the orbat. 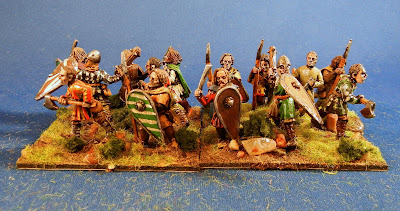 I also have two bases of militia completed. I'm not auper happy with these guys but that reflects a decalling snafu. These fellows came with decals so I left lots of mono-colour shields. But then had a mother of a time getting the decals on (did not fit perfectly). So some I left off and will need to touch up with paint. But I also needed to base them for tonight's game so I'll painting shield designs in situ--fun, fun! 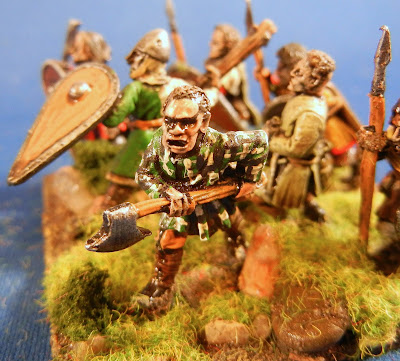 Up close with a hordes. He ain't pretty, but I expect he'd get the job done with the big chopper he's carrying. Looks vaguely like Dennis from this angle, but less witty.

I did three bases of 4Bd and again ran into the mono shield issue. These guys will be easier to fix up that the intertwined hordes, though!

And below there are two bases of 2Ps. A third is off camera as some drying glue pulled one of the figures over after I flocked the base (???) so he's getting some rehab.

Up next: Hail Caesar tonight with some 28mm Normans and Saxons (and friends). This is a second test game and this time I will add in terrain--trees and a small stream (linear obstacle). Then I need to take stock and mow the lawn. Probably some 1/72 War of 1812 artillery will be next. But there are also a bunch of 28mm Normans left to do plus a war wagon.
at 1:29 PM