I've been amassing some Heroclix figures in anticipation of Ganesh Games releasing Power Legions in the future. As a break from the unending stream of dark age warriors, I pulled a few out to see if I could add some depth to the pre-paints. 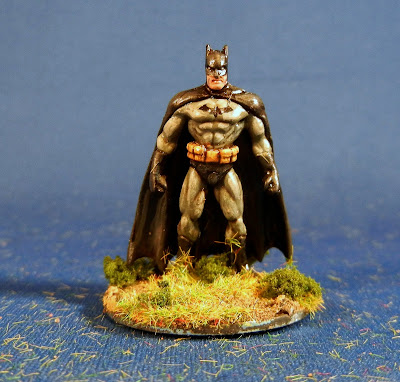 First up is this classic Batman, I added some layered highlights to the black and grey paint job and then I gave it a wash. Overall, this was a massive improvement over the original for not much effort. 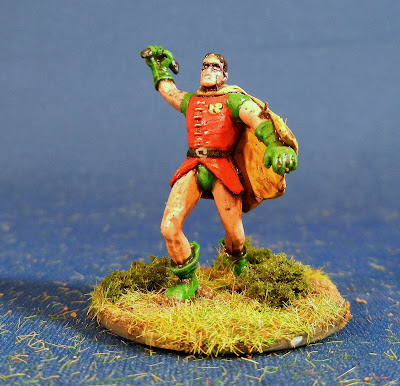 As I have several Robin figures, I picked the pose I liked the least to experiment on. Same process with an okay result. I note his crotch is alarmingly over highlighted. But that is not so visible when you look top down. Not sure what gunk got caught in the crook of his left arm. The glare off of the shiny wash also makes his skin look a bit patchier than it is. 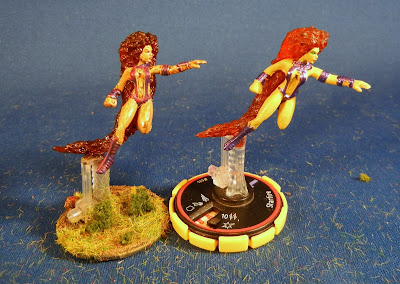 Starfire was up next and I thought to compare the outcome to a similar pre-paint. I'm not that happy with how Starfire came out. Oh well, live and learn.

I experimented with a couple of different basing options, include round GW bases. The GW bases we better looking but weren't quite big enough and were a bit tippy. Yes, I could pack them with bearings. Or I could just use the fender washers that I have lots of. I was also uncertain about how to texture the base and went with grass. Most fights are going to be in Gotham Park so grass makes the most sense.

Below is a scale shot of Bats and some 28mm Wargames Factory Romans. Bats is a bit thinner and taller but overall is similar enough in size to work with 28mm figures.

Up next: Some more 15mm Greeks are drying. And I have a few more superheroes one step behind them. And then some 28mm Normans are prepped for painting.
at 6:59 AM

texturing the bases is always a headache. I paint mine a sort of cracked grey-brown asphalt so they would be acceptable on a city street/indoor setting and look not too much out on an outdoor-type battle.