Back in November, I painted up a bunch of 28mm plastic Norman horse from Conquest Games for a DBA army. I was delaying the foot units awaiting Conquest's release of some plastic foot. But the Scott offered to take some Samurai off my hands in exchange for the left overs from his Impetus Norman project thus my foot will be metals!

First up were three bow units. I think all of the figures here are Old Glory. These painted up easily enough. 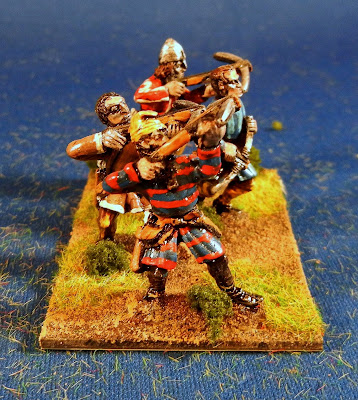 I was particularly happy with this fellow in the red and blue tunic. I'm not sure why I like him (not exactly a painting tour d'force). Anyhow, the missile troops are done! 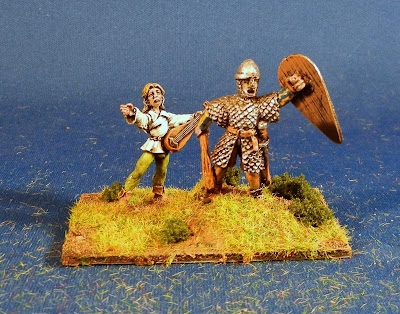 I also did two figures for a hero base (so I can use the army with HoTT). The fellow on the hill is a Foundry figure from a character pack. I think the pose is actually a bit lame. But the fellow with the lute behind him (from Reaper, I think) slays me. What hero would not want to have someone singing his praises? 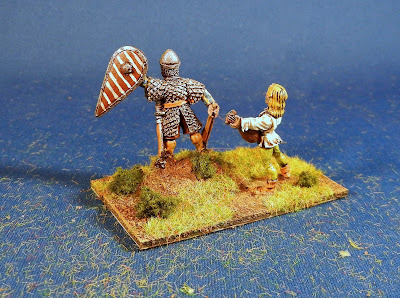 Up next: I have 15 28mm hobbits block painted for a Christmas themed army. And I have 30-some 15mm Greeks primered and ready to go for a commission. More Greeks will follow on the weekend. Then maybe more Normans.
at 8:55 AM

Thanks Ray. The pile of Normans (want to make several all option armies while I'm doing this) is fairly intimidating. But easy enough to do in small pieces.

Awesome Bard! I love it.

Thanks Kevin--a nice sculpt painted half hazardly--they key to all of my armies! :)