With weather reminiscent of Ice Station Zebra, I spent the weekend indoors, painting, watching curling and playing with my daugher. She saw Battlelore out last Wednesday when Bruce was over and asked if we could play. We've played some reasonably complex games (Carcassone, Forbidden Island) for a seven-year-old so I thought what the hell. 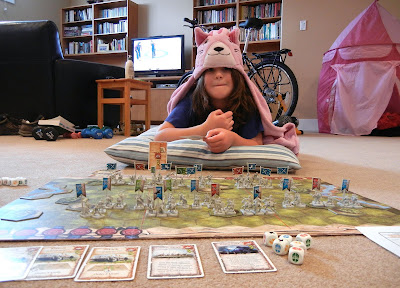 We played three games, two of Agincourt to learn the rules and then one game of the next scenario. I threw her the first game by not playing very hard. The second game I played much harder and only helped her select the right cards to play. I lost with some bad dice, although it was close.

By the third game, she was mostly selecting good cards. I figured I had her (below) as I closed in with a bunch of units and sought to use the hex grid against her to focus my attacks. But suddenly the dice turned--I rolled about 14 dice and got nothing! Then she turned around, stomped one of my units and it was over. 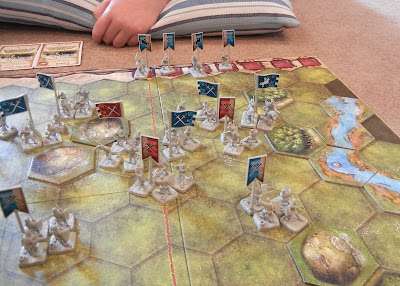 Up next: Well, apparently more more Battlelore if she's keen. I also made some progress on the 28mm vikings with a few hours spent working on their shields. I expect these fellows will take me the rest of the week!
at 7:54 AM

Yes, she is a fearsome tyrant. You should see her in her Harry Potter robes: -3 to all morale throws. Must crush her next time to maintain her respect... .

You'll never crush her. Such villians always have tricks up their sleeves and just when you think you've got them BAM! they pull a lever and down you goooooooooooo..........

Yes, I am a bit concerned by the secret lair she is presently constructing in the iceberg out back. You should have seen the brokerage charges when FedEx delivered the ion cannon last week.