We had 13 guys out last night at the club with five games running--a good turn out given the cold weather. It also appeared to be board game night. 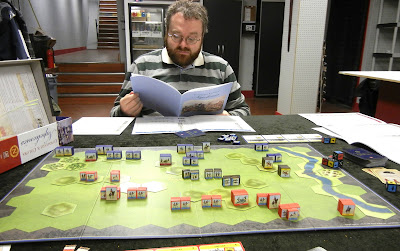 Scott and I played two games of Command and Colors Napoleonics. Here you can see Scott flipping through the rules at the start of game one. I managed to sneak out a win before we switched sides and Scott put the mother of all beatings down on me despite some lucky card play that ate his heavy cavalry. 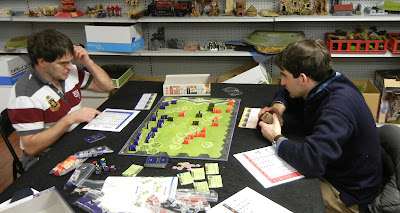 Bruce and Andy also played some CCN with the same scenario. Not sure how that played out but we all seemed to enjoy ourselves. 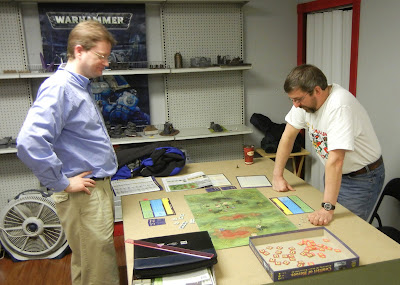 Over on two other tables, Craig and Terry and Dave and Kevin squared off in two games of Conflict of Heroes (WW2 eastern front). Very pretty counters. And Justin hosted Chen, Sean, Stuart and Randy in a game of 28mm Cry Havoc. 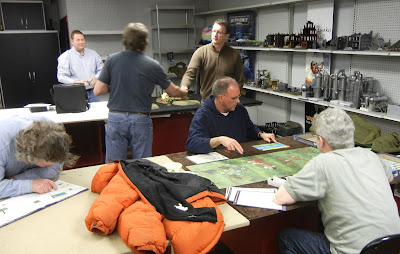 Up next: Some 15mm Hittites are about to roll off the painting line and some 15mm Greeks are getting built. I also have some 28mm Saxons about half way through production and some 15mm WW2 queued up. Then Craig gave me his BattleCry figures to do a quick paint job on. This should help fill the evenings as swimming lessons are going to impede Tuesday gaming for the next month. I also have a MayDay game to start thinking about.
at 6:48 AM

Wow, the room at your club looks incredible. Lots of room. Make sure that the guys used the v2 rules for Conflict of Heroes. We suggest using the Storms of Steel rules for both games.
:) Uwe Eickert - Academy Games

Greetings Uwe, indeed I had a copy of v2 at hand, even though I don't yet own Storms of Steel. It's good that Academy Games offers them as free pdf.

Your game is a gem, innovative and challenging. We really enjoyed it. We saw a German win in the Monsters scenario FYI.