I finished off a batch of 28mm Saxons this weekend. These are a box of Wargames Factory Thegns leavened with a few metal Old Glory figures (who may be Vikings) that I got from Dave in a trade. There are 44 figures on 11 bases which comprises the bulk of the Old and Middle Saxons lists and can serve as 4Wb or 4Sp. With all of the chain I'd say there are more of late Saxons army, though.

Neldoreth notes, in his comparison of the Wargames Factory and Gripping Beast Vikings, that you can have much more pose variation with the WF set--but this also means much more room for anatomical error. I was fairly unhappy with how many of my poses turned out (although not enough to cut them apart!). 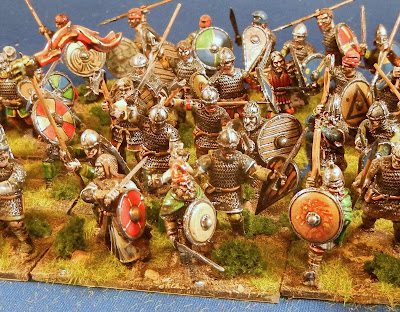 The WF set also has a lot of square on poses (shoulders squared to the viewer) and I was pretty happy to have some Old Glory to mix in (for example, the fellow in the front row above in the right) where the poses is narrower. I expect the WF are closer to anatomically true but the OG have a nice beefiness to them. 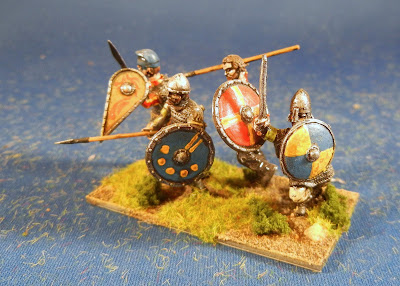 I have mixed feelings about the shields. Some of the patterns turned out nicely. And some look like hell--what happened with the yellow dots on the blue shield?!? I'd swear they were round when I put them on--I wonder if this is some sort of angle distortion? I will make more of an effort with the Vikings' shields. There is another box of Saxons (Fyrd) to make up some light troops as well as some Conquest Miniatures norman horse I will convert to make a mounted unit in order to complete this army. But I have a few other projects to attend to first. 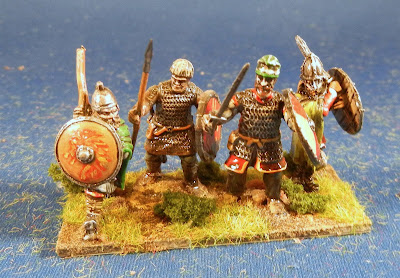 Up next: A 15mm Greek army is being based as I speak and I've just finished painting some 15mm WW2 US artillery teams--they need a dip. Some 28mm skeletons are drying after being primed--these are for my MayDay game. And there are annoying bugle calls from Craig's box of BattleCry figures. After that--who knows?
at 6:06 PM

Now that I look at, the command stand also appears to have a GW LotR Boromor plastic figure on it. A bit slighter than the metal version but it fits in okay.

Great looking army Bob! You should call up CVT to bring over his Normans to lay a beating on them.

Yeah, I've been run down by CVT's horse several times. Most unpleasant. I did email him tonight, though. Maybe I can cheat and win? Something to think about anyhow.