Craig recently purchased the re-release of Richard Borg's ACW Battle Cry game. He asked me to paint the figures and I started with the union side. The figures are a little smaller than 1/72--some folks suggest 1/76 but I'd say even smaller than that (when compared to old Airfix 1/76). Not quite HO scale, but maybe 1/80?

In any event, there were a fair number of these fellows. Below you can see one of the three generals. I used a basil colour on the base to try and get them to blend into the board some. I had a bit of trouble with the lighting--they are not this dark! There are also three cannons with a total of nine crew (not shown). 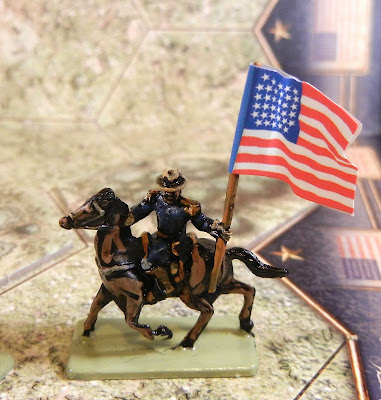 There are nine mounted cavalry in the set. I appreciated (from the perspective of assembling them) that they were one-piece casts. 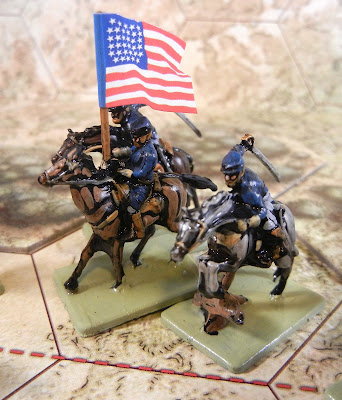 There are also 40 infantry. The flags are not sicking together that well and Craig might need to supplement the adhesive on the back of them with some glue. 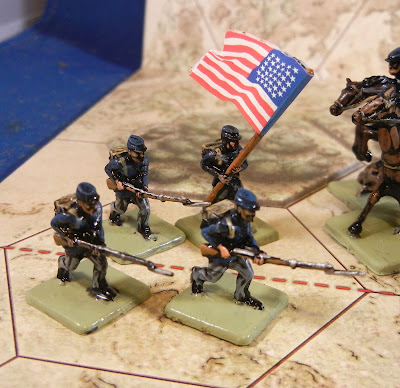 Up next: I'm going to spray prime the confederates grey this afternoon and get to work on them. Also I have a Celtic Chariot out on the work bench to finish up--I might do this one as the general's chariot with some fancy paint. And I have a game of Battlelore booked for Wednesday.
at 11:35 AM

superbly painted, wow and 15mm too.