Despite a barfing child, I finished some 28mm skeletons last night for my MayDay game. I needed a few reinforcements and I wanted to "Roman-up" my troops to help with the Teutoburg Vlad theme of the game.

With warmer weather, I now work with the window cracked and can again hear the scintillating conversation of the junior high students as they walk by. This has inspired the following description of the MayDay game:

"Oh, you want this back? Yeah, do you? Okay, here are your legions bro. But they be all dead and zombie-like, bitch."

"Oh, that's totally ass, man. You turned those dudes' corpses against me. Oh damn, that weirdo in the window's got his slingshot out again. Run, bitch! Run!." 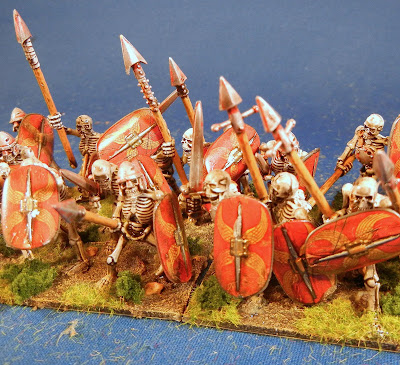 Overall, I was happy with these. Not as nice as the Zvezda figures but a lot less work in assembly. Only issue seems to be the big shields are a nice long lever which easily snaps off the skeleton's arms.

I have also been horse trading up a storm with packages going hither and yon and have just received my first returns. It includes Battlelore (which I am pumped to play) and a bunch of 28mm plastics. Anyone need some WF Romans or Celts?

Up next: Craig's union infantry are about half done. And I am considering priming the confederates with grey (must look about for a can of that). Thereafter, maybe some 28mm Saxons? I also have a 28mm Celt chariot to build which sounds less daunting!
at 8:11 AM

They're certainly nice, but I would have expected a few of them to wear a galea. And not to be Johnny Criticism, but maybe the long swords could have been filed down to gladius-size and the spears to pilums.

Please don't take this criticism the wrong way-- they're beautiful and a thousand times better than I could have done myself (my own paint jobs are laughable by comparison). Just would have expected a bit more "Romanization" than just the shields.

The oversized GW weapons maybe give them a quasi-barbarian look that can work. But yeah, the Zvezda guys would have been perfect for this if you can tolerate glueing together wrist bones in 28mm.

Walmart el-cheap-o grey is actually pretty good. $2 a can.

Dave: Thanks for the tip on the spray. Yeah, 28mm wrist bones and the cost of the Zvezda stuff now that it is OOP was deterrents! Especially for a one-off lark to run at a convention.

Joseph: Yeah, I'm playing a fantasy game so I'm not filing down weapons! I would have swapped out the weapons for actual Roman stuff (I have extras) but these all came moulded on and no way was I going going to try and drill out he hands of a skeleton!