With gaming Tuesdays messed up by swimming lessons, I drove out to Bruce's last night to get in two games Command and Colors Napoleonics. Bruce set up the Waterloo scenario and we each took a turn with the French.

Above we see Bruce's brave charge with the French cavalry up the middle. Fortunately, I dug into my bag of gamey CCA tricks, cut off his retreat and managed to stop them before they rampaged too much. This was a nail biter with the British winning a close game. As a strategy, I would call the British approach rock'em-sock'em as I attacked with whatever card seems most likely to cause a short-term win. Sometimes this works! 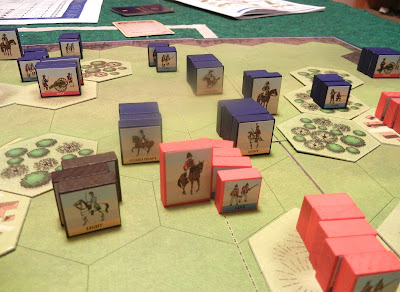 We switched side and then I played the French who started out with a massive traffic jam. I spent the first six or seven cards sorting that out and responding to a British thrust on my left. I then moved up the right and got three lucky banners. And then responded to Bruce's cavalry charge (he always charges!) with a counter charge and managed to grease enough of his horse to win. Again, a lucky win but one that came from careful planning and hoarding of a key card until the right moment. 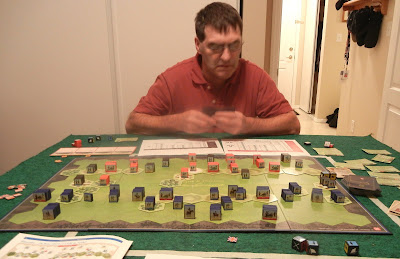 Here you can see Bruce's hands in motion as he tries to stave off defeat. Not quite a quick as a Young Chuck Norris, but close. Below you can see some new 15mm sci-fi guys Bruce showed me--these are meant to be "space dwarfs" or something like that. They look great in person!

Up next: First, getting the grease spot of the lens of my camera! I have some 15mm WW2 US artillery done and awaiting photography. And some 28mm skeletons need basing. I primered some of Craig's union infantry black last night. Should I use white primer on the confederacy?
at 6:31 AM

Yes, I think you're right. Looks way cool even with a three-colour paint job. Should be an interesting addition to a game of FUBAR sometime.