There are five bases of 3Ax which forms the core of the army. I was requested to mimic the nice paint scheme on the box art, including the cowhide shields.

There are all three bases of 3Cv, including a CV General in armour. The spears were supplied by the owner and are plastic. He also (bless him!) drilled out the hands--which is on the one part of Xyston armies that I loathe.

There are a pair of 2LH. 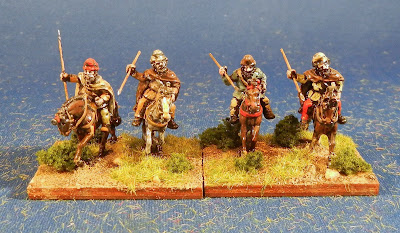 And we round out the light troops with a pair of 2Ps skirmishers. An interesting army: lots of bad going troops combined with a fair bit of mobility. 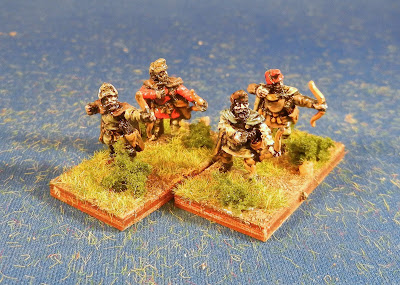 Up next: 15mm WW2 artillery is being based. I am painting some 28mm skeletons for my MayDay game. And, when the temperature rises tomorrow, I will spray prime some of Craig's 1/76 ACW fellows from the BatteCry box. Hard to say after that--perhaps the remainder of the 28mm Saxons army will receive some attention? I also have a game of CC: Naps with Bruce scheduled for Wednesday night.
at 8:48 AM

Nice paint work... what the hell was with that ebay posting?!

These are just too pretty to hate...

Yes, adeptgamer, the auction was hilarious!

FYI, I've never had a problem spray priming in the cold when the models and paint can are kept inside until used, then models brought back in after they have de-gassed for about 1h or so. I prime in the garage throughout the winter.

Dullcoating is another thing, however.