I've been working away on the bulk of a 28mm DBA later Viking/Leidang army this week and have finally finished them. These are mostly Wargames Factory Vikings (thanks Mark!) with a few GW models (thanks Tim!) and a handful of Old Glory (thanks Dave!) thrown in.

Given that there are only four basic bodies on the WF set, I think I've been able to make a fairly diverse group of Vikings from them. I tried to do a better job on the shields than I did with the Saxons. Alas, I am no Neldoreth.

Below you can see the general base and one other from behind here--a black base and a black wash makes these fellows pop. I believe there are 11 bases of 4Bd/Wb. 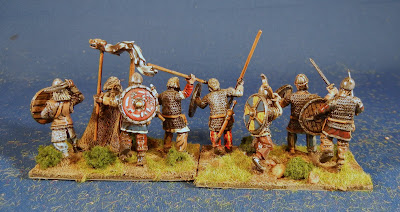 From a job lot, I pulled out this fellow to be a Hero for a HoTT version of the army. He is huge compared to the other figures (I used a WF shield and it looks like a bucker on him). 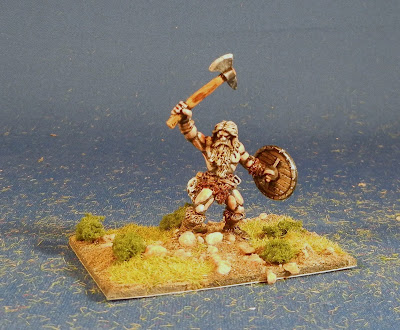 I also have one base of 3Bd/Wb. I was less satisfied with this base for some reason. Just not very fearsome or animated maybe. 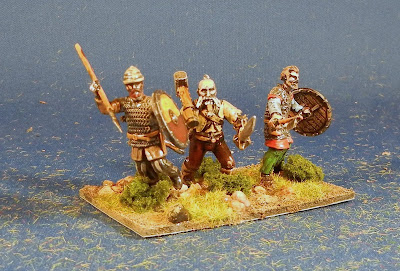 Up next: I have 96 1/72 War of 1812 American troops glued to sticks awaiting a primer coat and some attention. I have also been inspired to get my goblin HoTT army out of the bin it is in and onto the painting table. Then likely some more Vikings (cavalry, bow, hordes, etc).
at 7:28 AM