I picked up a game of Battlelore in a trade and hauled it out to Bruce's last night. I am sure I have played this before (Calgary, I think). We decided to try out the rules without the magical component to see how it played compared to CCA and CCN. 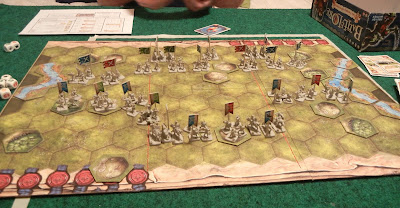 We managed two games, including set up and rules orientation in 90 minutes. That said, the rules orientation amounted to "Like CCA but no leaders and you retreat one hex". We had once close game and one blow out. The rules seemed to mirror medieval combat pretty well--you get stuck in and you are stuck. 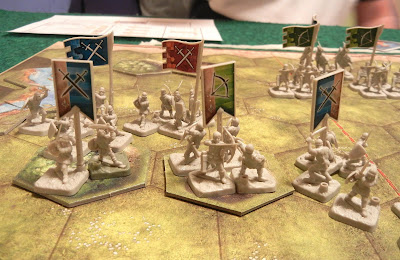 The game uses plastic figures rather than blocks. I like the figures, although the blocks make it easier to identify who owns what. Battlelore uses horizonal and vertical flags which are okay but not a clear as block colour. I also found it slightly challenging to differentiate blue and green units--the angle of the flag and the shading makes the colours slightly indistinct in the lighting we had. But that is a minor quibble.

We had a series of devastating cavalry charges (lucky dice) in the second game where Bruce's left flank got pruned by two beat up units that were hell-bent for leather. We added in mercenaries (goblins in this case) and they seemed to be a nice enough addition--a bit of colour but not too many extra rules. I'm keen to add in the lore (magic) component as well as monsters next time. The production values of Days of Wonder (versus GMT) are pretty lush.

Up next: I'm working on some 1/76 ACW confederates and I also have a 28mm Celtic chariot constructed that needs priming and painting. Thereafter, probably more Saxons and maybe another game of Battlelore next week.
at 2:38 PM

Interesting! I have to ask, what scale are the models? Could they fit with 1/72 troops? You've gotta paint those bad boys.

Andrew: They are somewhere between 15mm and 10mm. The plastic is very soft, especially the ankles of the horses. Yeah, I could paint them... but that would be a next-year project!