I was cleaning the basement last week (i.e., moving stuff from one pile to the next) and I unearthed an old 1/72 Airfix castle (I think Dave gave this to me but I wouldn't swear to that--might also be from Bruce?). Anyhow, I almost tossed it into the recycler and then though I could make some 28mm camps from this. 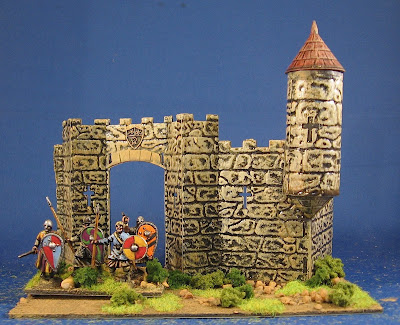 A few minutes of cutting and breaking and viola, two partial castles to use as camps. The camp pictures above and below (with some 28mm HaT Anglo-Danes conversions) is a legal DBA camp (as far as I can tell). 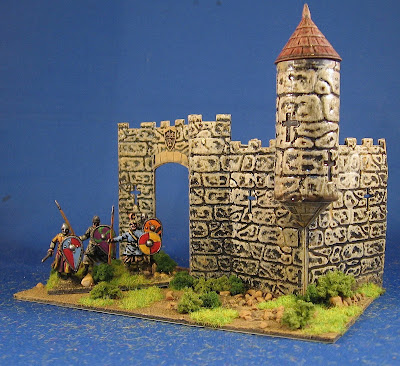 The camp pictured below is a legal HoTT camp (and could be used in DBA if you hung some of it over the edge of the board although I've never seen anyone at our club balk at a camp). 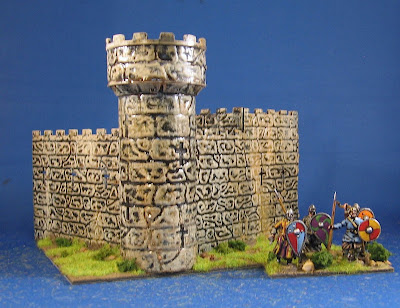 You can see a bit of damage on the left side of the picture below (late night cutting to make it fit on the base) that I need to fix. Maybe some climbing ivy. Also, I think these could use some troops to garrison them, although that reduces their utility. 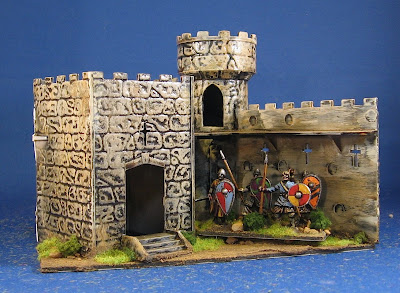 Up next: I'm making slow progress on some 15mm DBHx AWI guys. I may push up some 28mm seige engine crews so I can complete those bases. Thereafter, who knows. There is quite a stack of 15mm armies to be done. And I won some 28mm medieval guys at the silent suction I may do quickly to morph my medieval army some more.
at 11:30 AM

What are the dimensions of your camp? I haven't made one for 28mm and I'm a little hazy on the rules requirements.

Nice how you reclaimed an old model. I have to think about a DBA camp for my vikings. I'm leaning toward a simple scratch-built tent like Baueda sells.

Good idea, dang, I should have kept it!

Andrew: I believe DBA requires the camp to fit in a rectangle where the length plus width is no greater than 4 element widths. So with 60mm elements that would be 240mm (about 8 inches).

HoTT was larger (maybe no more than 600 paces to a side?) but then you have to figure out what a pace is in the real world at 25mm. I'm pretty sure my camps were 5x3" (DBA) and 5x5" (HoTT) but would not swear to that (don't have them handy). Hell, they may not be legal after all!

Dave: Ah they were yours! Well, they will soon be populated by figures of yours from the auction! Perhaps you could arrange a coup?