I've had several 28mm medieval and ancient bits awaiting some fine tuning and I moved three of them off the painting table today. First up was a siege engine for the IV/84 Burgundian Ordonnance army. The catapult is from Zvezda's 1/72 medieval siege engine kit while the trooper is a 28mm Zvezda fantasy figure. 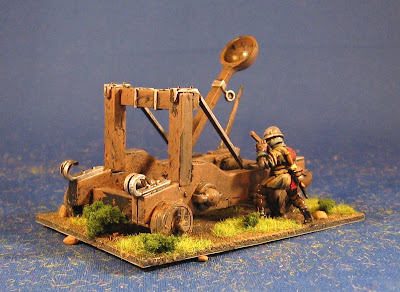 The Zvezda siege engine kit is very useful and would work for either 1/72 or 28mm. The kit also contains a scorpion that I have recruited to my Roman army by adding a few Wargames Factory republican Romans. This will allow me to morph the Marian Romans (II/49) to Early Imperial Romans (II/56) 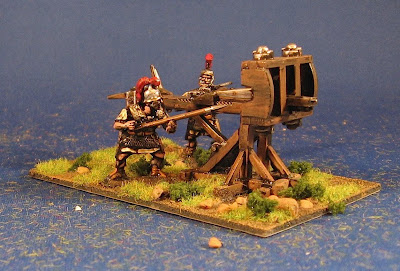 Finally, I worked up a hero general base for my Burgundian Ordonnance army if I want to use them with HoTT. These are Zvezda 28mm fantasy figures. The fellow on the left is holding a sword, the blade of which you are seeing edge on. This angle hows some of the folly of Zvezda's over-engineering of these figures.

Yes, you can give the guy any weapon you want but, by making us glue the blade and hilt to the handle of the sword, you are pretty much guaranteeing the damned things are going to be off-plumb in one direction or the other. I used sticky tack to hold this and took a lot of time to line it up but, short of some sort of jig, I can't see how I could get this one straighter. %#&$(*^@ 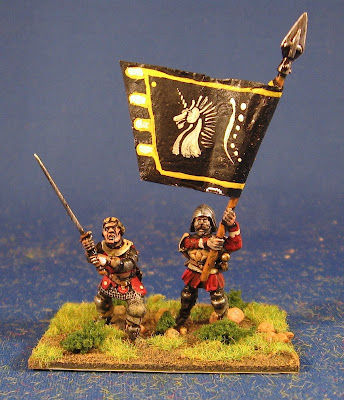 Up next: I have half of a 15mm rebel (errr... patriot, sorry Dale) AWI army done and drying. I also have five bases of 28mm medieval pike almost painted--these will help my medievals morph a bit more. Thereafter, I might go back for more 15mm AWI. I also have a skeleton head I need to finish up for a fellow.
at 9:09 AM

Thanks--I just keep emulating your stuff to the degree I am able!

Bob, they are awesome! Good work fella. Should go down a treat with HOTT.