I picked up a box of HaT's 28mm El Cid Spanish Heavy Infantry two weeks ago on a whim. These looked appropriate for 11th century heavy infantry (I was thinking Normans) and I painted 20 over the weekend.

The key attraction of the box is the cost: 32 figures for $14 is a hell of a deal. Some may also like the more realistic proportions of the sculpts--in this way they are more like 1/72-scale figures than the heroic 28mm we are used to. I think they also painted up passably well. I have a second box (light infantry) on order and think they will get based up to complete a DBA Anglo-Danish army. Yes, I have a thing for perpetual loser armies! But for $28 an army, it is a heck of a deal! 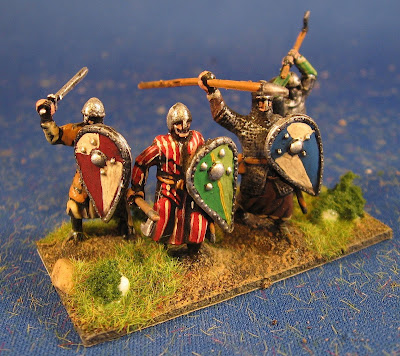 The downsides of the box include ring hands (which are unnecessary given you can glue the plastic with airplane cement) and very brittle plastic (I snapped most of the spears either trying to insert them in the ring hands or by accidentally jarring them while painting. The sculpts themselves are passable but not really in the same league as Wargames Factory or Warlord Games. There is no way to use decals on these shields and I don't think they will mix with Conquest's upcoming plastic 28mm Norman horse (although HaT has cavalry on the way). 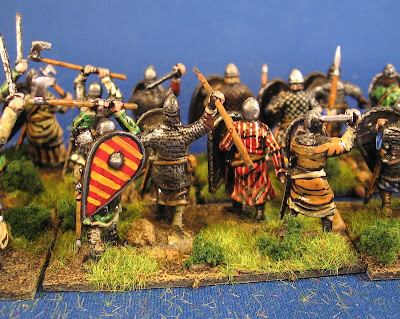 Up next: I have two batches of 15mm AWI troops drying and another three batches just primered. And it is club night tonight--I'm going to try DBA-RRR with Mark.
at 3:00 PM

Are they made of the same softer plastic that most of the 1/72 figs seem to be?

Nope, a very hard plastic a la GW figures (but more brittle--almost like resin on the thin items but clearly plastic that reacts with airplane glue).