We had our second night of the EDBAG 1066 Harold's Demise campaign last night and managed to move through both 1067 and 1068. At the beginning of the night, everything had come up Green Vikings! 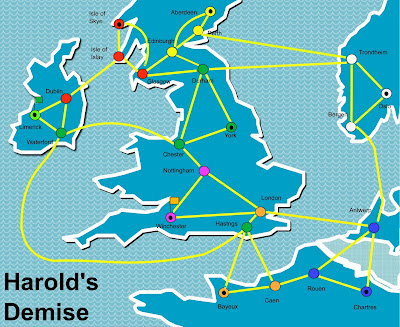 Then 1067 dawned and with it a global war against the poor Green Viking. What feckless allies I have! Basically everything went south in game one where the Green Viking took on the Orange Normans in Bayeaux and lost 6-0. Yes, six even odds combats lost in one turn. What an ass kicking. And so began the long retreat.

The beginning of 1068 saw a different board. The Orange Normans successfully besieged Hastings while the Anglo-Saxons successfully besieged London. Durham fell to the Scottish Islanders and by the end of the turn so did the Green Viking capitol of York (although Durham was recovered!). Alas, another loss to the Orange Normans on the field (added by the Scottish Islanders) meant the Norse Irish became free men. The Pre-feudal Scots and Blue Normans mixed it up twice in 1068 with a victory each. 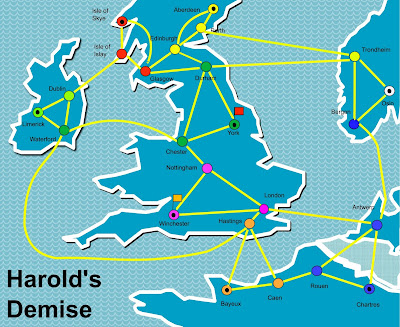 I'll happily accept updates on stands remaining and prestige if my notes are incorrect.
at 11:08 AM

The flag over York should be red I think?
I lost 2 stands in siege and one stand in fighting, leaving me with 9.

I think I have 2 prestige from the last battle according to pg 15. I do not receive prestige for net elements killed (killed 0 and lost 1 = -1) and gain an additional 2 for camp capture. I don't believe that net elements are considered negative prestige, at least we have not been counting them that way since the losers of battles do not go down in prestige.