As promised, some 15mm AWI Dragoons finally finished drying. These were very nice figures to paint once I got my eye into them.

Overall, this has been a nice little commission with enough diversity to keep it interesting.

There are still four bases of light infantry as well as a Tarleton figure to finish basing tonight and then this lot should go out the door on the weekend. 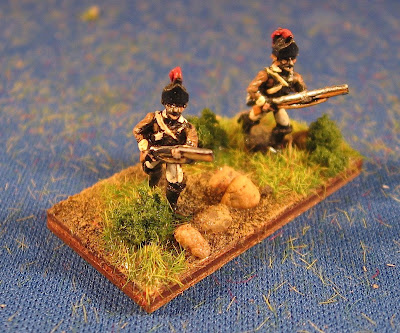 Up next: I finished painting the remaining 28mm Anglo-Danes I need for my DBA army. I will seal them tonight and should have them based by the weekend. I also cut up an old Airfix castle to form the basis of two 28mm HoTT/DBA camps. I will work on these next week--one for the Anglo-Danes and one for the medieval army. The next figures up are some 28mm Romans and medievals to crew the siege engines I have built and waiting.
at 2:00 PM

Nice extra detail on the basing on these.

Thanks. Yes, they turned out well! I wasn't sold on the litko bases but hey look nice. Having only two guys on a base allows for a bit more scenery.

Those are the same bases I use for my 28mm Normans. They're a nice solid base.

Yeah, it took me awhile to figure out the most efficient method of basing the figures on the litko bases (I still prefer floor tiles for my own stuff which are sticky one side and easier to customize) but the Litko bases work very nicely. Once again operator error on my part was the issue!