About four (?) years ago, I picked up a bunch of collectable ships (sold like baseball cards and then built) for the Pirates of the Spanish Main game. I ended up with about 45 ships that look like these. 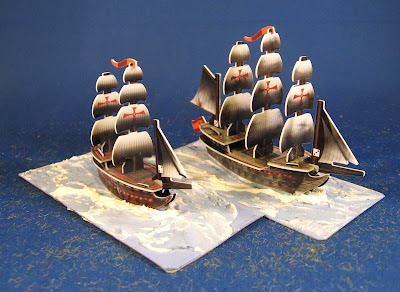 Towards the end of my interest, several new varieties of ships (like the schooner below) also became available. 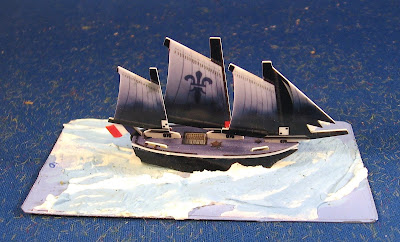 I based these up on steel. I gave several rule sets a try (including Bruce's homebrew "Steady as She Goes") but none quite recreate the fleet action that I wanted so I put these on a shelf. Rather unexpectedly, I came across another lot of about 45 ships and bought them on impulse. Many are similar to those above but some are from newer expansions to the game. 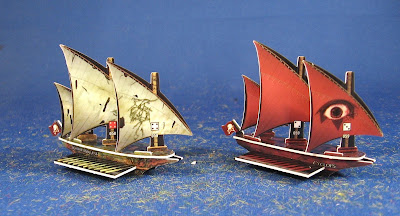 There are a couple of galleys with oars (pirate ships, by the look of them!). There are also a couple of junks (aptly named given the construction difficulties they pose). 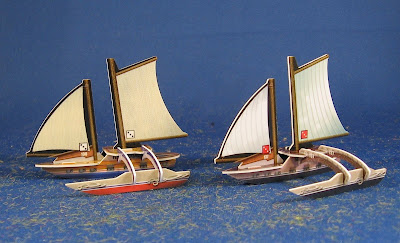 Then there are some outriggers. And then things get pretty weird. For example, there are various sea monsters and ships with Captain Nemo-like inventions such as the "pincer" ship below with claws to hold its prey. 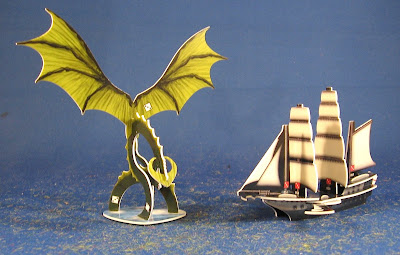 I built all of my new ships last night while watching the election results. While basing will take some time, it re-interested me in naval combat so I'm looking for a set of rules that would allow me to fight fleet actions. Suggestions most welcomed! I have downloaded GMT's Flying Colours rules to have a look through.

Up next: Some 28mm DBA/HoTT camps are done and drying. And I have a 15mm AWI DBHx army on the painting table (lord it is big!). And tonight is the club and our auction.
at 12:04 PM

Bob, I'd love to have a go at Flying Colors sometime. Let me know when you're giving it a try.

I had a look at Flying Colours today and it looks a bit more complex that I was hoping. What I'd like is something that is a bit less complex.

Let me know what you try and decide upon. I am in the same boat [snicker] as you as I bought a boatload [sorry, can't help myself]of these miniatures too, and none have floated my boat [I know, it gets tiring].

So, blog any experiments or solutions. One of these days I am going to read the Trafalgar rules I bought...

I found a set of fastplay rules in Issue 1 (August 2006) of the short-lived Wargames Journal (which was online for awhile and now seems to have disappeared?) called "Fast-Play Napoleonic Naval Rules" and includes a Battle of the Nile Scenario.

Looks pretty simple but the command and control rules seems to be missing (or not written!). I'll maybe run a game on November 2 at the club. I wonder if four players each controlling three to five ships and not allowed to talk to one another during the game will create enough command and control problems that further mechanics are not necessary?