I completed a 28mm Anglo-Dane (III/71) DBA army this weekend using HaT Industries new(ish) line of 28mm El Cid hard plastics. This army below requires one box of heavy Spanish infantry and one box of light Spanish infantry and ran me $28. When the El Cid cavalry issue, it should be possible to morph this into various Frankish armies as well. 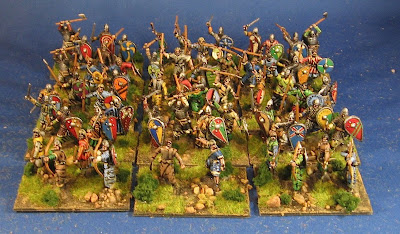 The big push this week was to get a bunch of 4Sp done. The light Spanish infantry box provided most of these.

As I noted in an earlier post, the figures aren't that great but you can improve them with painting and the price is right. The close up below is the result of a black undercoat, some careful block painting and a dip. It won't win a golden daemon (!!) but it is good enough for gaming. 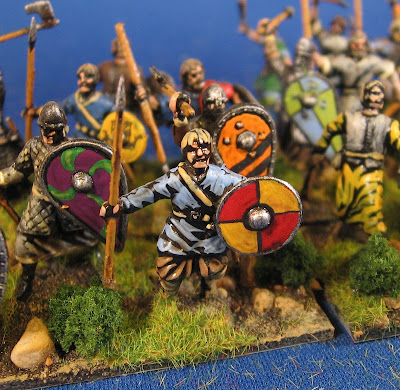 I also did two bases of psiloi. The slinger figures are a mix bag. The rear pose is good. The front pose is the pits, showing off some of the weaknesses of one-piece sculpts. 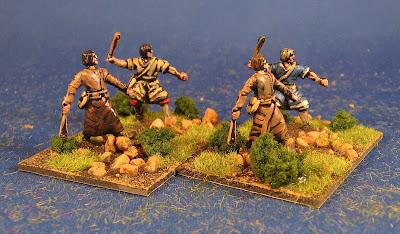 I also did bases of 4Bw and a base of 4Cb. These were extra figures and allow the army to morph or will act as shooters in HoTT.

I've had a couple of questions of scaling. The picture below shows the HaT (centre) alongside GW Bretonnians (left) and Zvezda Empire (right). The height is the same--the big difference is the heft with the HaT being much more realistically proportioned. Sorry the picture is slightly blurry.

Up next: There is club night on Tuesday (with our annual silent auction). I have two 28mm camps in process--just need some basing work. And I have just spray primed a 15mm AWI army that I have for DBHx and have been dithering on for a year. Mark wants to try some gaming so I'll get these done. Also primered are the remaining figures needed for Roman and medieval siege machines.
at 11:03 AM

That's a great looking army you've got there, Bob!

I love the bases! A well done base always adds a lot to the stand as a whole!

Can't wait to see these guys in action!!

Thanks Tim. Yes, well, I'm not so keen on action as I've played Anglo-Danes before (some you painted for CVT) and had them ridden down many times! But yes, I think this is a good start on the dark ages in 28mm. When I can get some scratch together I will do vikings--lots of plastic to choose from. Same with Saxons!

I'm kind of surprised that the GW figs weren't notably taller than the others. From that view it almost looks like the Zvezda are bigger.

Yeah, the Zvezda (standing upright) are a bit taller than the GW (leaning backwards a bit). GW are heroic mostly in their build, not so much their height. Although I may have older GW sculpts here.