15mm AWI Over the Mountain Men

I finished up some more 15mm AWI guys for a commission. These 20 fellows are Over-the-Mountain-Men and are dressed in a mix of home spun and buckskin.

The figures are really quite nice and there are a few new poses since I painted another batch of these during the summer.

One of my favourites is this officer. I see that his rifle is a bit bent (not obvious at 100%, only in the enlargement). 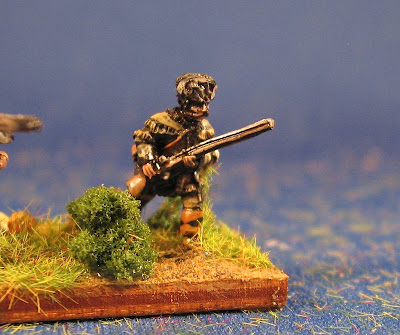 Up next: I have another AWI unit with bases drying (2nd South Carolina) plus a bunch of other AWI guys (including Tarleton) on paint sticks with the flesh done. And I put together a second box of HaT 28mm El Cid Spanish which should give me just enough guys to finish an Anglo-Danish army. With good weather, I hope to spray prime these guys this morning on my coffee break. Things will be slow over the weekend but next Tuesday is the second round of the EDBAG 1066 Harold's Demise campaign.
at 7:07 AM