Bruce machined-up two early WW1 armies for an eastern-front go at Square Bashing last night. I played the Russians trying to overwhelm the Kaiser's boys. Bruce had lots of troops in reserve that he could never get onto the board while all of mine arrived right at the get-go. 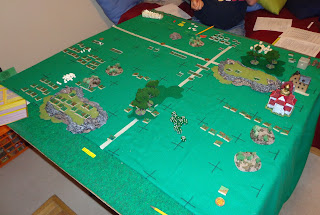 I rushed both flanks and managed to pushback what few troops Bruce could muster. And, as the game ended, I thought I had a clear victory in hand. But then a couple of his units held firm against overwhelming odds and I only won a marginal victory. Fair enough--good luck and not-stupid tactics carried me further this time than last. Bruce played a crafty defense. 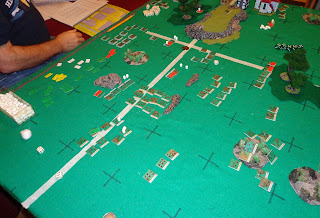 Up next: Hard to know I need to get together a War of 1812 game for the club next week. I also have a couple of buildings on the painting table. After that I might start painting on my Battlelore figures.
at 3:35 PM