We had a good turn out at the club last night, with nine guys and two games. Stu put on a game of 6mm FUBAR for Chen and Dave. Dave kept shouting "I'm going commando on those guys!", which led to tittering from the other game. 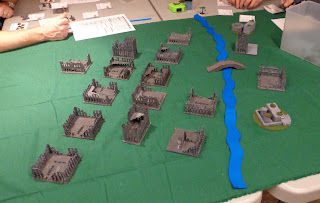 Bruce put on a WW2 aerial game in 1/700 for Scott, Kevin and Terry (RAF) and Will, Bruce and myself (Germans, Vichy branch). Bruce had to get the stukas off the board while Will and I "escorted" them in Me109s. We faced a mix of Hurricanes and Spitfires. 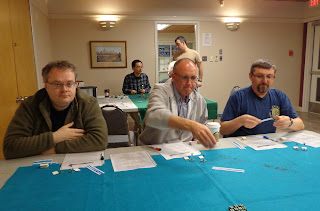 I think the system worked pretty well as we had six guys all playing at once with only minimal umpiring necessary once we'd all thrown our first dice in anger (or, in Scott's case, despair). 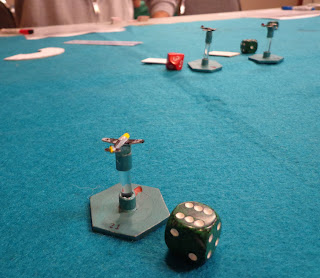 The British won, dropping both the bomber but at the cost of three fighters. If it has been a points game and had gone one more round, I think it could have tipped towards the Germans based on the positioning of the planes. I actually shot down two planes and didn't lose anyone (totally the opposite of my usual flying--of course, no one yell "next one to shoot Bob down wins"). 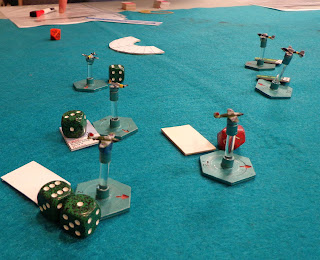 Up next: Some 28mm WW1 Germans on the painting table. I have a few more details to work through (rifles, metal and whatever uniform detail there is) before moving them to basing. I also primed a bunch of 1/72 19th century RCMP/militia.
at 12:12 PM

A fun night...thanks to Bruce for putting on the air game!