A local gamer has asked me to paint up some 15mm WW2 troops for Flames of War. This is a late-war German army for the Battle of the Bulge. Nice figures and I started with the rocket units. 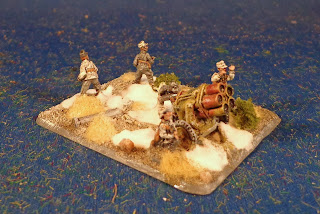 I've never done a snowy base before. After looking around, I hit upon glue and baking soda as the snow. One of the things I was struck by was how an all-white base tended to wash out and look a bit fake. So I tried this mixed base with some dead grass, some frozen ground and some snow drifts. If the owner doesn't like it, I can add more snow! 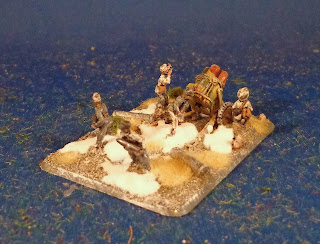 There were six bases of guns. A nice-enough model with minimal assembly. I'm not sure the rockets the guys are holding are the right size. There are also some extra canisters of ammo for the bases.

The owner asked me to give these guys a mix of regular uniforms and winter smocks. My sense of German logistics at this point was that a change of underwear meant "Frits, you change with Horst" so most guys got incomplete outfits.

The radio operator was a nice figure and I quite like the command bases. 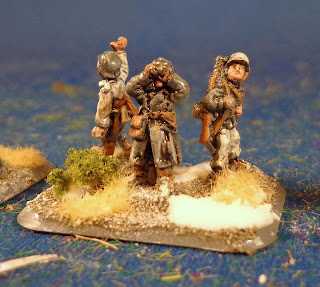 Up next: I have a bunch of 15mm foot troops mostly painted. And it is the club tonight. Then back to more 15mm stuff including two jadgpanthers and a Me-252!