Bruce and I refought Quatre Bras last night (twice!) using Commands and Colors Napoleonics. I managed two wins with the British--once because Bruce couldn't roll worth beans and once because I couldn't miss. Close games--they could have gone either way with a bit more even luck.

The first game saw real command card mismatches, with me having only centre cards and Bruce having only flanking cards. Fortunately (for the British), a cannon in the woods (below) managed to just cause havoc with the advance on the British right. Cannon in woods (or towns) is very effective and I wonder if one is supposed to count both the firing out of and firing into terrain effects (we only counted the worst terrain effect). I also had some luck with a cavalry charge that munched a couple of cannon units. 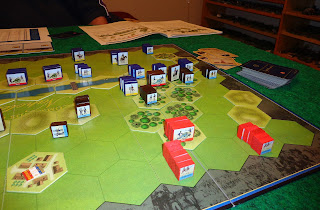 Game two was a bit different with Bruce launching a horrific cavalry attack against me. It was awful: you so gotta watch Bruce--it looks like he's just rearranging deck chairs and then boom--he's rolling seven dice against your militia units. I only barely managed to beat the attack back and sneak a win. Who you gonna call? The grenadier guards! 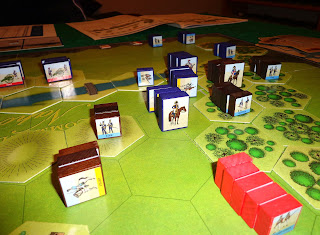 Bruce also showed off a bunch more 1/700 planes from Tumbling Dice, this time from WW1. 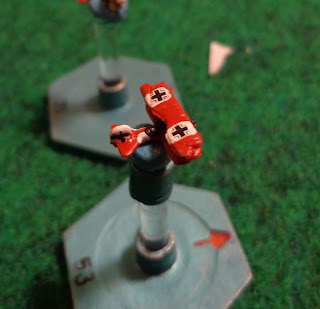 Up next: A building is almost finished then onto some 28mm vikings. And perhaps another game with Bruce if I can get a hall pass! Alas, work is cutting into my painting time.
at 11:36 AM

I love those Tumbling Dice planes, and have the complete set (although I wouldn't dream of going down the red triplane route :) ). Sadly they don't do any early war planes.

Pretty sure into and out of terrain penalties both apply. Arty firing out of a woods hex into another woods hex are -2.

That would make more sense to us in term of effect; just couldn't find the right rule in the heat of the game (an index would help!).