I dropped in on Bruce last night and we gave Square Bashing (by Peter Pig) a go. Bruce printed up armies to see how the rules played. I'm not really a big fan of WW1 games (meh) but I'm game to try new things. And printed armies meant we could do this on the cheap. 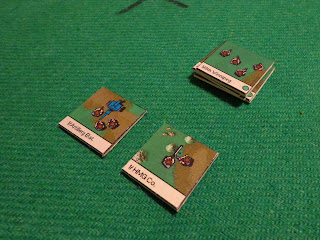 We did a Canadian attack on some Germans. For the first game we did not use fortification (trenches) but rather played a breakthrough. Well, it was supposed to be a breakthrough but the only thing broke was my army.

Interesting mechanics with area movement, neat turn sequence (you fire during the opponent's turn), a really nice mechanism for dealing with the unpredictability of corp-level assets. There were four victory squares to bag and we learned as we went so my strategy may have been suboptimal (ahem).

Of course I chose the double-envelopment. On the right, I bagged and held an objective right away but I should have doubled up on MG units, not infantry. On the left, I had a breakthrough choked off by Bruce's reinforcements. Up the middle, I just incompetently deployed and got my ass handed to me (so a historical outcome then!). It was a pretty serious kicking, so good on Bruce! 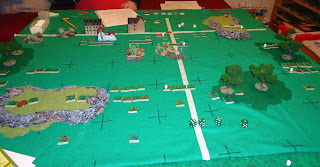 Overall, a nice set of rules that played well. We were basically doing the mechanics in our heads by the end of the game (but the QRS was necessary). I'd certainly play again--maybe a trench attack or something on the Russian front with cavalry. 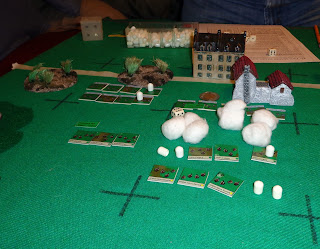 Great review, where were the counters from?

No idea where Bruce got these. I will ask him--I presume somewhere online, though.