Bruce got Mr. Madison's War (GMT) for Xmas and we gave it a try last night. It is a card-drive game and is somewhere between Washington's War and Wilderness War in terms of complexity. Pretty map that includes the main theatres of the northern part of the war (picture below looks "north"). 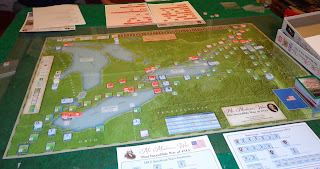 I moved up towards Detroit to try and secure the western part of the board. Bruce managed to stymie here several times (bad rolls on even-up fights) and I never did make much progress. The Niagara frontier also was a bit of a bog. 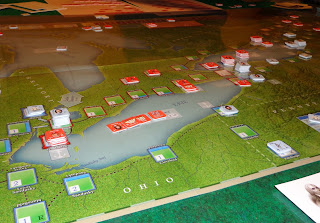 What I should have done is marched from Albany to Sackett's Harbor and tried to cut the British supply line. This would have forced the British play to send his troop from Montreal west (slow). Instead I went up the finger lakes and then had Bruce march right back down with a huge force in 1813. 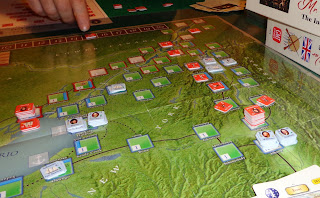 He then attacked me at Albany and, in a tight battle, routed my guys by rolling an 11! We called it there and there was nothing more I could do. Overall, plays a lot like War of 1812 (Columbia Games) with more detail and a different set of mechanics. I'd certainly play again to try a different strategy and to see if the additional detail gives a better strategic game than War of 1812. Not really comparable to 1812: The Invasion of Canada (Academy Games). 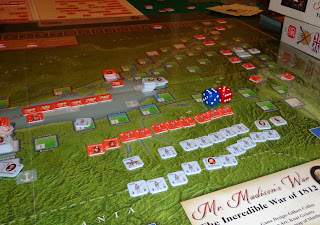 Up next: Still working on some 28mm dark ages guys. Block painting is done so detailing, initial basing and fiddling with shields tonight.
at 11:13 AM