Awhile back, I bought a copy of the game War: Age of Imperialism at the club for $2. An awful game but the box is full of miniatures, including an endless bunch of British colonial troops (foot, cannon and mounted). My first thought when I opened the box was: "These guys look like North West Mounted Police." Since then, I've been considering what to do with these guys and how to game the Riel Rebellions. 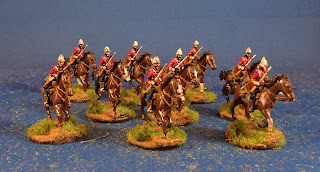 I'm still working out the specifics but I started painting up a small NWMP force this weekend. I finished 9 men on horses. Not great sculpts (Airfix quality) but the price was right (less than a penny a piece) and they paint up well enough to play with. I also have cannon and foot being based right now. 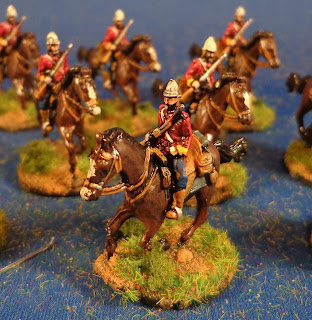 I'm thinking about using a hex grid (yes, how surprising...) and DBA command mechanics (a la For Honour and Glory) to give a basic structure that can handle battles of different sizes (right now I have some good maps of Batoche). I've scoped out Indian and Metis figures as well as the US Cavalry (think Inspector Steele vs General Custer).

Up next: A bunch of Canadians for a Very British Civil War are just about dry along with some more 1/72 figures. After that some more superhero buildings, I think. And Bruce wants to try Square Bashing tomorrow night so maybe some game shots.
at 11:44 AM

I've often wondered how to do the Northwest Rebellion of 1885 - and am determined to do it some day! I'll probably use my mash-up Ever Contemptible Victorious Little Black Powder Armies (of DOOM!).

I have a few units of the Rafm 25m figures. A few of them are even painted!

I thought about RAFM but then these guys fell into my lap. I also thought about the Sword and the Flame. Not sure precisely where I'm going but it is unusual to have battlesites located within driving distance and I've always been interested in the the basic dynamics--huge area, logistics issues for both sides, inability of the more powerful to "hold" anything and still prosecute the campaign--a lot like the AWI in that way. But an interesting map game as well.