Bruce brought over a game of Man of War (not GW's Man-o-War, but rather a 1983 game by Simulations Canada) along with his new GHQ ships. 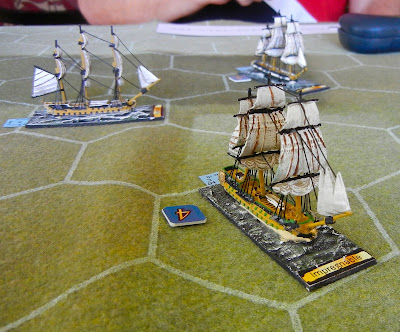 We played a pair of meeting engagements. In the first game the wind turned against me just as the two lines met, meaning I was in irons while Bruce sailed around me, and laying down a serious beating. 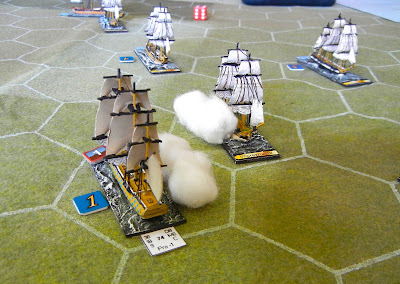 I could not roll to save my life and, with ships striking colours and others with decks awash, I conceded. 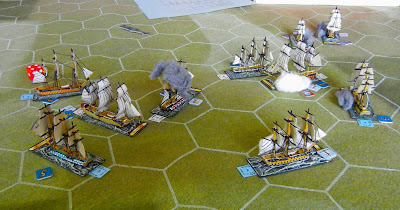 Game two started better. I had the wind, was in a good formation and was crossing Bruce's T with my main line.
\ 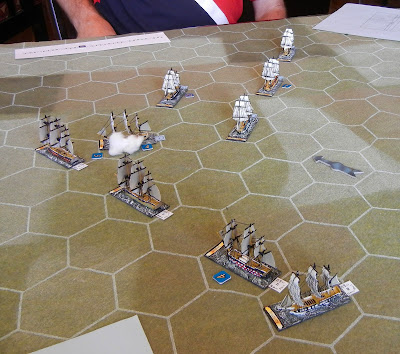 I caused one of his ships to surrender and then started shooting blanks again. Bruce out shot me about 5 to 1 before my ships started packing it in an again I conceded. 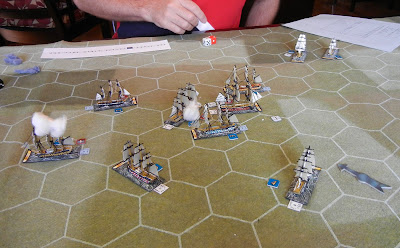 Overall, this was a great set of rules that Bruce tweaked by adding a Mustangs-like movement sequence. Everything worked and it showed off the miniatures well with no need for a roster. I think with tweaked fire factors, it would work well for Great Lakes battles in 1812.

Up next: Some 28mm renaissance foot are drying. And I am building some 15mm ancients for a commission.
at 6:21 AM

Jebus, they have rigging. Impressive.

Neat trick Bruce got on TMP. Build, paint then cut florist wire to the correct length and paint black. Then glue in rigging. No sagging, no knots and a real eye popper!