With summer drawing to a close, Bruce swung by yesterday for another game with his new ships. This time we tried GMT's Flying Colors.

I was a bit hesitant when I saw the QRS (such big combat resolution tables!) but this was unfounded and the game played quickly and well. I started out well, cross Bruce's T.

Things went downhill from there as he started pounding on my hulls while I shot at his rigging. A swirling battle ensured and I managed a very narrow victory (although as it turns out, I win by a huge margin in victory points). 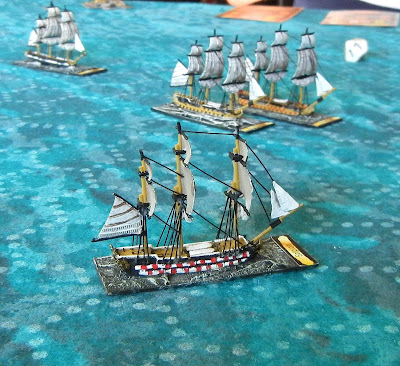 Overall, a solid game that plays about the same as Man of War. Flying Colors felt a bit grittier (more like I was sailing) and I think Man of War would be better for a multi-player club game (things would move faster) but both were fine systems.

Up next: I have a 15mm Aitolian army painted--just need to wash and base it. Then onto some more 15mm Greeks and then back to some 28mm renaissance.
at 7:15 AM

Nice looking ships, I'll check out the rules, we use home rules for our games.