I finished off three bases of the 28mm renaissance foot I started this week. I will set these fellows aside as I focus on a 15mm commission but more are awaiting attention!

These are GW Empire troops. I think I finally started to get the painting sorted out on renaissance. A bit too bright overall, but that is easily remedied with some black, cream and brown thrown into the next batch. 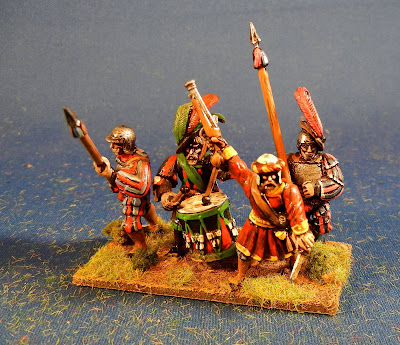 The command base could likely use a standard attached to the upright pike on the right. Otherwise, I think this base is ready to lead my troops into several horrible defeats. 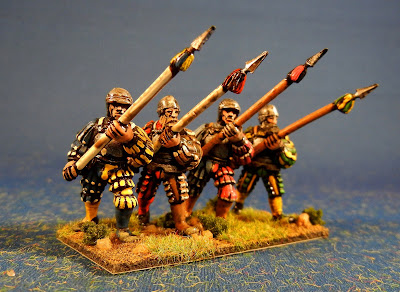 These advancing pike/spear are okay. I wish the spear were longed but they rank up nicely with the short spear. I have some Perry late medievals that will get pressed into use with longer pike. 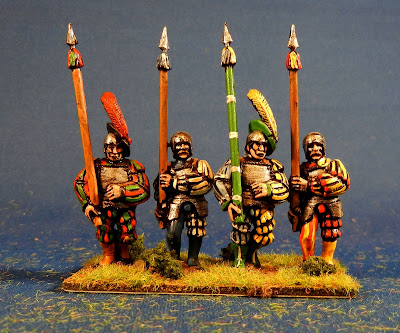 These fellows seem ready to form a second rank of pike. Future builds will have more variety of heads and whatnot--I was using up some of the pre-built figures that came with the job lot I got on TMP. I think there is some nice diversity of colours and decorations here. 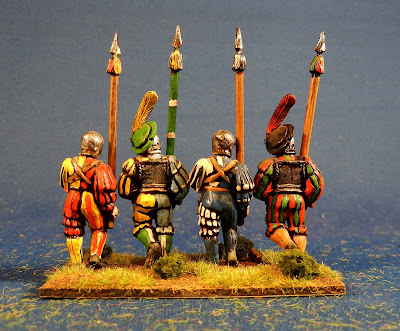 Up next: Some 15mm Aitolians are primed and will get some paint this morning. Then some more 15mm Greeks. Then back to some 28mm renaissance. There is a mounted general base as ready to take paint. And I will build some pike and shooter units from the figures I have.
at 9:01 AM

I like the colors on these. I've been thinking about getting a big box of plastic Renaissance or ECW figures for a new HotT army, but I need to finish painting my dwarves, expanding my undead, and regluing my Imperial Guard and spider horde armies to their bases.

Damn, yo! Slow down! You're making ME look like a slacker!?

These just keep getting better and better...

Thanks guys! Yes, these are starting to get into the zone where I'm happy with the painting. Things will slow down in the next week as my vacation ends, the garden needs some attention and I spend some time on a commission.