Some US troops for the War of 1812 finished up last night. These are 1/72 Imex Alamo Mexicans (I think) and are painted up as regulars. 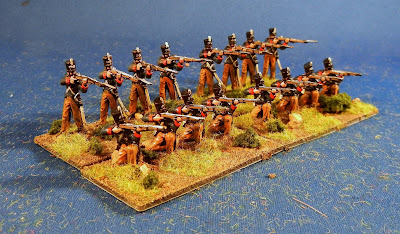 Four bases in a shooting pose made a nice grouping. I'm not sure how accurate the kneeling pose is (hard to reload that way!) but the visual is nice enough.

There were also several in marching poses.

And finally our friend the colonel, who appears to have recently ducked for some cover. How undignified. I'll see what I can do about getting that stray flock off of him. Up next: Some British War of 1812 cavalry and irregulars are underway, although they will take some time--maybe the end of the weekend?
at 7:02 AM