I swung by Bruce's house last night and we tried a larger game of Hail Caesar, using the River Po scenario from Command and Colors Ancients as the basis of the game. Bruce played the Carthaginians and I played the Romans. 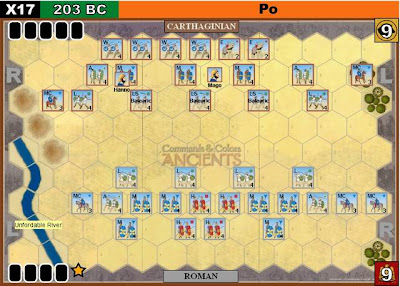 We were using Bruce's collection of old 15mm figures and centimetres to scale down the size of the board. The flexibility of the game re: scale is quite handy. 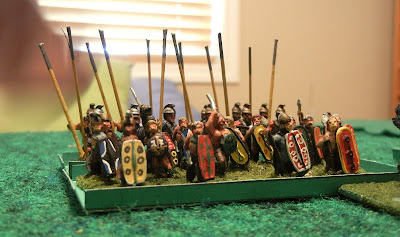 We just winged the deployment but followed a roughly historical pattern with the Romans in the foreground and the Carthaginians on the distance. There were 18 units a side, including a fair bunch of skirmishers, some elephants and some heavy infantry--this felt like a fairly well developed game with enough "colour" on each side to give us a sense of the true play of the game. It took us 90 minutes to get through the game--we seem to be averaging about 30 minutes for every 6 units on a side.

Within about 10 minutes, the battle had started to shape up with my wings moving to encircle him and my centre stalled due to bad command rolls. On the left, I got fairly lucky with my horse but they eventually were drawn away from the fight and cornered by a warband. This left my medium infantry at the mercy of his elephants and his infantry.

As his wings buckled, Bruce came forward with his centre but his army cracked before we could really join the fight. Despite how it looked, it was a close game as both my my wings were largely shaken into ineffectiveness in the early going.

Overall, not a bad game. The skirmishers performed some useful tasks and I think we could get much better as using them as screening forces. Some of the subtly of the special rules become evident. We still waffled a bit about the utility of the break table (is there a better way to do this?) but the value of it is becoming more apparent. 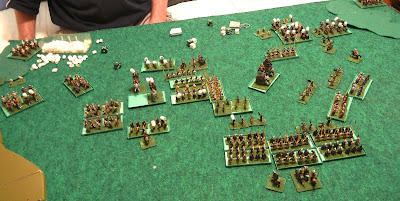 Up next: Some War of 1812 figures are drying. And Ill be running another game of Hail Caesar at the club (Celts v Romans with chariots and whatnot) on Tuesday.
at 8:28 AM