I dropped in on Bruce last night and we played two games of For Honor and Glory, Worthington Games' War of 1812 block game. We chose the Crysler's Farm scenario. 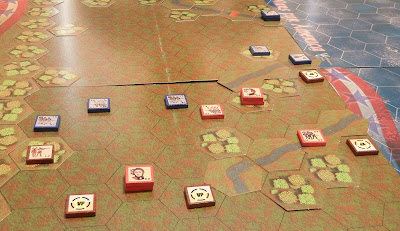 I played the British first and was fortunate to put one of Bruce's commanders out of the game early on, which put him at a huge pip disadvantage. Alas, I did not pay enough attention to the gunboat on the river and ended up losing it to some cannon fire. 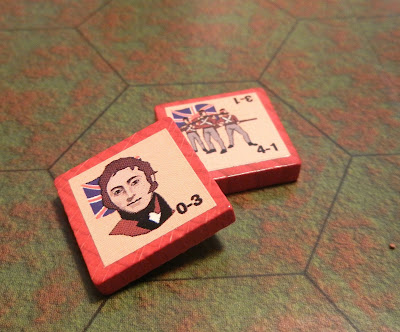 In the end, the Americans ran out of time and troops, not unlike the actual battle. We then switched sides. 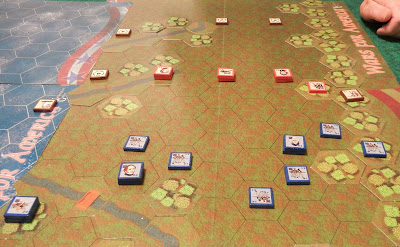 As the American I too had trouble sustaining a decent advance in the face of endless British command pips and withering fire. I tried to use my commanders to rally troops when perhaps force marching them might have been better. I also ignored Bruce's gunboat, which might have been a mistake. 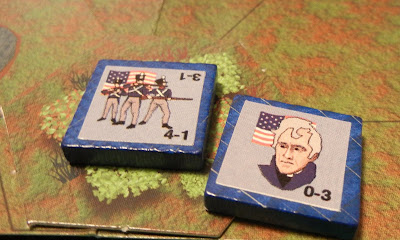 I got to about the same spot at Bruce before running out of troops and time. I'm not sure this was the best scenario to start with--the troop density was quite low. But I had a reasonably good time.

Bruce commented it did not feel like linear warfare. I'd agree with that as area movement isn't the same as lining up troops in DBHx. That said, it nicely modelled command choices like trading space for time, having to prioritize some actions over others. It also integrated land and naval combat very seamlessly. 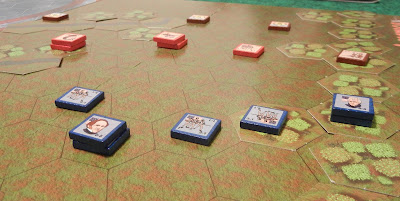 Up next: Some 28mm superheroes. Then some more 1812 figures, although likely not until early next week. The club is Tuesday and I think I will put on a game of Star Wars HoTT.
at 6:04 AM