I needed a camp for my British War of 1812 troops. I thought about doing something military (e.g., redoubt, officer's tent) so I started rooting through my box of extras and ran across a bunch of pigs. And then I thought "imperialist pigs!" (I'd had a fair bit of caffeine at that point). And then I thought, "hey, I know". 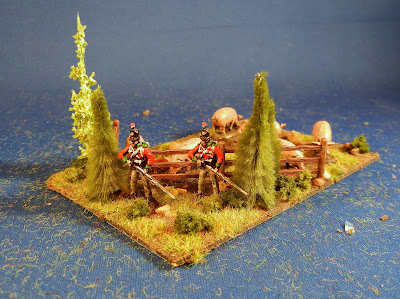 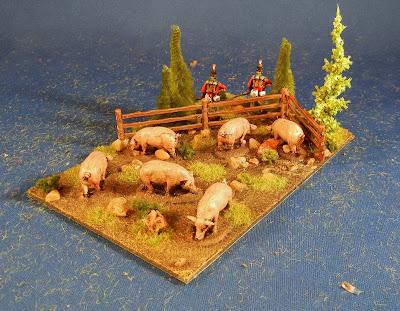 The fence is an old railway model that I won as part of a job lot at the EWG auction this spring. The pigs are from an Imex pioneer set. And the soldiers are Revell Napoleonic British Riflemen. 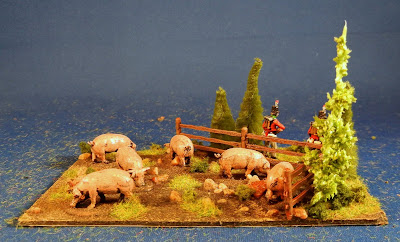 Up next: American militia and dragoons are drying. I have started to block in colours on some 28mm Normans. And I built me a bunch of ratmen yesterday for a HoTT army so I will prime them today if the weather cooperates and berry picking doe snot take too long!
at 6:53 AM

I can honestly say that that camp stinks! I love it. I wonder how some of these 20mm soft plastic livestock minis would stack up in 25/28mm?

Pigs would be fine; cattle would be a bit smallish (although perhaps pre-GMO cattle was smaller)? You can often find "farm set" toy cattle on fleabay that work fine with 28mm.

Top rate camp. Really original and great use of odds and ends.