We had six guys out this week, including guest Will and two games ran: CCA and Hail Caesar, both in 28mm. 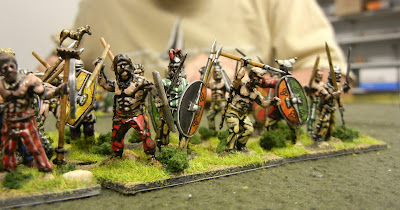 Hail Caesar was a Briton v Roman game played out on a 12x4' board in inches. The units were shallow to accommodate the figures and space we had. The game went quickly, with contact almost immediately. The Romans ground down the warband, although took it on the chin (or is that "Chen"?) in the first round. 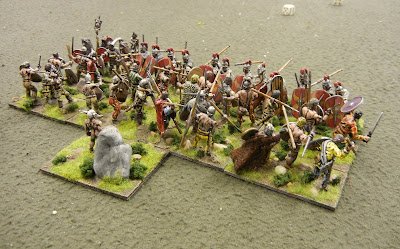 I misbased the chariots so they were rather more effective than they should have been. The good news about that was they were dramatic, cutting through the Roman horse and the sweeping around to catch the Roman line from behind just as it was about to crush the rest of my poor warband. 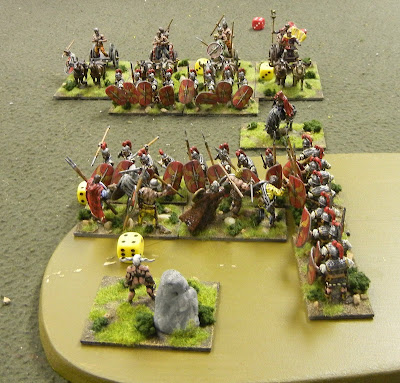 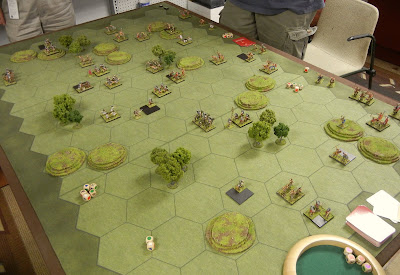 I believe the Romans won both of the games that were played and then we were off early for pie. Up next: Some 1/72 American foot are just about based and I have a bunch of Canadian militia and British cavalry for the War of 1812 primed and ready to paint.
at 6:09 AM

That mat really looks nice; very tempting. I also like the little hills you've made for it.

Yes, Kevin's terrain is lovely. And the mat is very tempting. I'd like to improve my terrain next year and I'm not sure of the way to go is to invest in a new mat and better trees and hills or buy into a terrain set like Hexon.